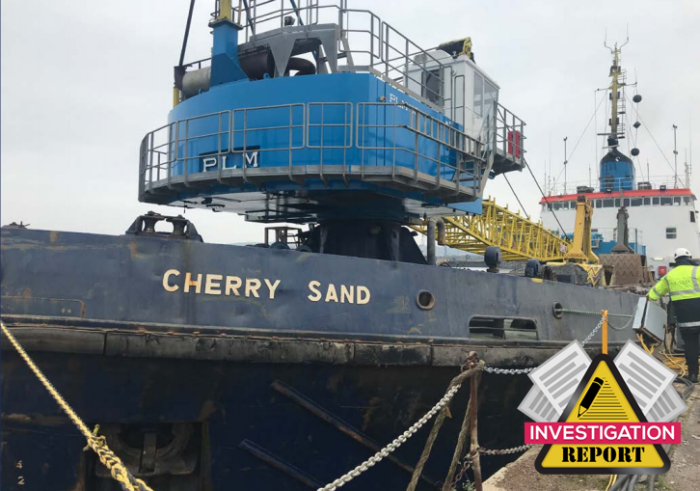 UK MAIB published its report on a 28 February 2019 incident. Then, the master of Cherry Sand was crushed between the dredger and the jetty after he fell while attempting to step ashore to assist berthing the vessel in Rosyth, Scotland.

The dredger had arrived in the port the day before to complete a dredging campaign in the non-tidal basin, in preparation for the arrival of the UK aircraft carrier Her Majesty’s Ship (HMS) Queen Elizabeth. The master took over command of the vessel at 1200 following a handover from the permanent master and a new joiner induction conducted by the chief officer, who was also a temporary appointee.

Dredging commenced the next day following a brief on the campaign, which included a representative from the port. Over the following few days the operations manager observed the master’s handling and manoeuvring of Cherry Sand.

On the day of the incident, the master was on the quayside to release Cherry Sand’s mooring lines. After releasing the last line, and with the vessel starting to move slowly away from the berth, he stepped up on to the vessel’s rubbing band and climbed over the bulwark on to the main deck. Cherry Sand departed C berth and headed towards dredge area T3 within the tidal basin. The plan for the day was to dredge areas T3 and T4. The operations manager remained on the bridge with the chief officer throughout the dredging operation.

Over the course of the day, Cherry Sand dredged areas T3 and T4, depositing the spoil at locations within the basin after each dredge. After the final deposit, the dredger headed towards M berth to land the debris. Before the master went to the forward station, the chief officer reminded him not to go outside the bulwark until instructed, and the operations manager subsequently made an entry in the deck logbook that a toolbox talk had been completed with the master.

On the bridge, the chief officer was at the port side maneuvering control station and the operations manager was outboard of him. At 1550.59, as recorded by the closed-circuit television (CCTV) on the berth, Cherry Sand was on its approach to M berth.

The master, who was stationed at the port shoulder with an AB, stood on the mooring bitts and looked towards the quay. After 7 seconds he stood back down. The chief officer had misjudged the approach, and he brought the vessel to a stop in the water.

The operations manager then took the con and started to give helm orders to the chief officer. Five seconds later the master briefly looked over the side, once again standing on the mooring bitts before stepping back down to the deck almost immediately.

Using the VHF radio, the AB then reported to the bridge that the bow was 3 metres of the berth. The master was standing slightly forward of him but behind the mooring bitts on the port side. At 1552.08 Cherry Sand began to move astern as the chief officer realigned the vessel to make another approach. By 1552.30, Cherry Sand was again approaching the berth, and the master once again stood on the mooring bitts.

At 1553.02, the master stepped down from the bitts. Twenty-three seconds later he stepped up on to the bitts, and at 1553.34 he climbed over the bulwark to stand on the vessel’s rubbing band. He then stood with his back to the bulwark, facing the direction of travel, with his hands holding on to the bulwark.

The operations manager attempted to call the master back inboard using the VHF. The AB also advised him that it was too early to step outboard, but the master assured him that he would wait until the vessel was alongside before stepping ashore.

By that time Cherry Sand was closer to the quay and closing the berth at a slow but steady pace. At 1554.08, some 33 seconds after he had climbed on to the rubbing band, the master held on to the bulwark with his right hand and extended his left leg towards the quay.

One second later, as the master moved towards the quay, he fell. The master’s foot missed the quay, and his torso hit the chains and quay edge before he bounced between the dredger and the quayside and disappeared from sight.

According to UK MAIB's investigation, the following factors contributed to the accident:

A recommendation has been made to the Maritime and Coastguard Agency (2020/118) to amend the Code of Safe Working Practices for Seafarers to provide guidance on mooring and unmooring operations, and when it is permissible for vessels to self-moor.

A recommendation has also been made to Associated British Ports (2020/119) aimed at ensuring a common approach to safety and the application of company procedures across the UK Dredging fleet. 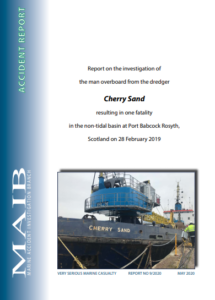