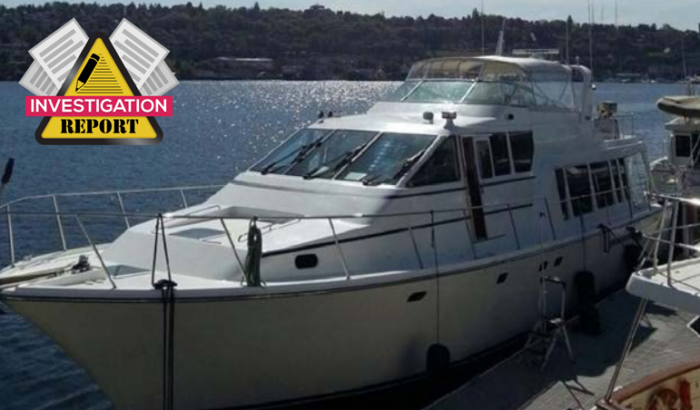 NTSB published its report on the recreational yacht Silver Lining. The yacht, on July 23, 2019, hit a submerged rock southwest of the Hood Canal Bridge in Hood Canal, Washington. The vessel sustained damage to the hull, propellers, and rudders, and took on water. The eight people on board safely departed the vessel.

The Silver Lining departed Pleasant Harbor Marina on July 23. The owner was at the helm, taking his family on a water tour of the Seattle area.

The vessel proceeded up the west side of Hood Canal, avoiding the restricted Navy Operating Area for the Bangor Submarine Base, and putting the vessel closer to the western span of the Hood Canal Bridge.

About 1500, the owner was operating the yacht from the flying bridge and preparing to change the vessel’s course to port to proceed through the 230-foot-wide channel opening under the western span of the Hood Canal Bridge. He waited until the yacht’s 12-foot-long dinghy, towed astern of the Silver Lining on a 100-foot line, passed the number 4 navigational marker on the southern part of the Sisters rock formations before he turned the vessel to port by 10 to 20 degrees and started to slow the vessel from 15 to 12 knots.

The vessel stopped, and the port engine then shut down also. The automatic bilge alarm indicated that the vessel was taking on water, which the owner confirmed in the engine room. The vessel had grounded on the Sisters, a charted group of two rock formations, and then started to drift. He directed his family to put on life jackets and depart the vessel; the son-in-law took them to shore on the dinghy. The owner then contacted the Coast Guard via the vessel’s radio; a Coast Guard boat, the local marine police, and a salvage company responded.

The owner restarted both engines in an attempt to move the vessel closer to shore, but the engines shut down when he put them in gear to the propellers. He then restarted the port engine (keeping it in neutral), which could operate as an emergency bilge pump to dewater the vessel’s engine room by changing the saltwater suction for the engine cooling from outside the hull to inside the engine room. At first, the owner felt that the port engine was keeping up with the water ingress, and he left the vessel to join his family on shore.

When the Jefferson County Sheriff Marine Unit arrived, the owner returned to the sinking vessel. They discovered that the port engine had stopped operating and the Silver Lining was lower in water. The Coast Guard station boat also arrived on scene and tried to dewater the vessel with a gasoline-powered portable pump.

The owner and sheriff went to retrieve a pump from the Hood Canal Bridge, but before they could get it, the Coast Guard boat crew informed them that dewatering efforts would not keep the vessel afloat. The vessel owner and sheriff returned to the Silver Lining and saw that it was even lower in the water, and there was no way to enter it.

About 2 hours after the vessel started taking on water, it sank with just the bow still visible above the surface and still adrift.

A salvage company arrived and moved the vessel to a shallower area of water closer to shore by Rock Island so that it could be salvaged and refloated.

The National Transportation Safety Board determined that the probable cause of the grounding and sinking of the recreational yacht Silver Lining was the vessel’s operator not properly determining the ship's position approaching the west span of the Hood Canal Bridge from the south.

This caused damage and uncontrolled flooding, after striking the charted Sisters underwater shoal. 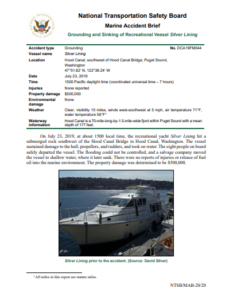