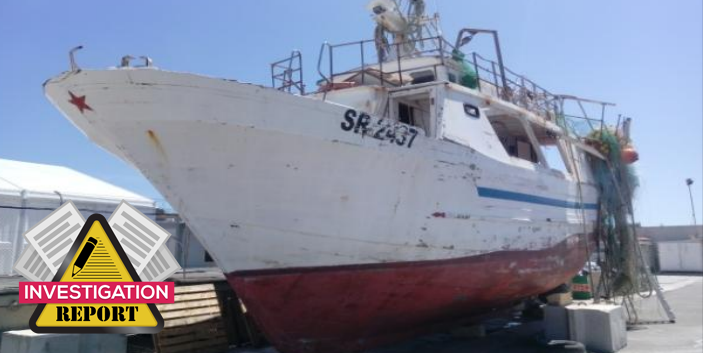 Transport Malta MSIU issued an investigation report on the sinking of the fishing vessel Zaira in Marsascala Bay, resulting in death of two fishermen, on 4 May 2019. The investigation highlighted that the vessel sank after flooding of compartments and loss of stability in heavy weather.

On the early morning of 04 May, Zaira was heading towards Valletta to seek shelter from inclement weather.

The vessel was around 3.5 nautical miles (nm) from Valletta, when a high wave from the East caused it to heel heavily to the port side.

Eventually, a second wave caused the vessel to heel further to port and take in water through her hull openings.

The fishermen lost control of their vessel and had to abandon it.

The combined wind and wave action caused the vessel to drift towards Marsascala Bay, where it eventually foundered and came to rest on the bottom of the seafloor with its mast above the sea level.

Two fishermen made it ashore, but two others perished and were recovered several hours later.

-of sinking: In all probability, Zaira sank following flooding of compartments in adverse weather conditions and which led to loss of buoyancy and stability.

-of deaths: None of the fishermen was wearing lifejackets. The mechanic jumped overboard in rough weather conditions while the deck boy was pulled out of the sea after the liferaft capsized. In the absence of autopsy reports, the MSIU attributed the deaths of the two fishermen to drowning.

-of flooding: Survivors recalled that the vessel did not return to the upright after the first wave hit its starboard side. Then, a second wave caused the vessel to heel further to its port side and eventually it started taking water and could not be recovered.

The poop deck was not entirely open to sea as it had a sheltered deck covering over the sides and the engine-room, and an extended bulwark on the starboard side.

Zaira was encountering waves of at least five metres high. Due to the vessel’s motion in the seaway, with her bulwark being two metres high, the raised forecastle deck wide open, and her poop deck open at the stern, green seas were being shipped onto her decks.

Furthermore, the door from the raised forecastle deck to the port side deck was found in two pieces.

Transport Malta advised the owner of Zaira to: