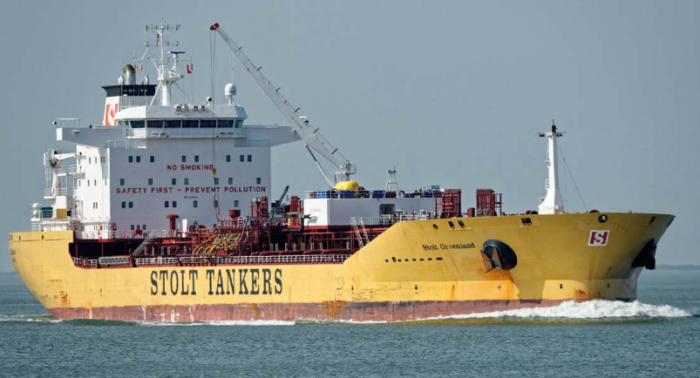 The UK MAIB issued an interim report concerning an explosion and fire on board the chemical tanker Stolt Groenland which occurred that day in Ulsan, Republic of Korea, looking for the factors that caused the explosion.

On August 17, 2019, the Cayman-Islands registered chemical tanker Stolt Groenland began its voyage from sailed from Houston, USA for passage to Kobe, Japan via the Panama Canal. At the time, the vessel was transmitting 02 different chemical cargoes in 37 of its 39 cargo tanks.

On September 28, the chemical/ products tanker Bow Dalian secured alongside Stolt Groenland’s port side. The vessel commenced its purging of Bow Dalian’s cargo tanks with nitrogen supplied from shoreside vehicles in readiness for a ship-to-ship cargo transfer with Stolt Groenland.

Yet, later on, vapour started being released from the pressure vacuum valve for Stolt Groenland’s number 9 starboard (9S) cargo tank, whereas later a high level alarm was sound marking that the level in 9S cargo tank had reached 95%, soon followed by a high-high-level alarm indicating that the level had increased to 98%.

By that time, Stolt Groenland’s on-watch deck officer and chief officer had made their way to the cargo control room and they saw from the cargo monitoring system that the pressure inside 9S cargo tank was rapidly rising.

Suddenly, two explosions were seen and heard in rapid succession in way of the tanker’s cargo manifold. The resulting fireball passed very close to a road bridge above the quay.

The incident resulted to the injury of crewmembers and other people working at the area. Specifically, Stolt Groenland’s gangway watchkeeper, who was blown over the guardrails by the force of the explosion; a deck rating on board Bow Dalian; and, a number of shore workers, including firefighters and police during the emergency response.

According to the interim report of the UK MAIB, the first findings of the investigation are the following:

Following the fire incident, Stolt Tankers B.V. engaged salvors to assist in making Stolt Groenland safe. The discharge of the remaining chemical cargo from the tanks that were undamaged was completed by the company’s personnel.

In the meantime, the Ulsan Regional Office of Oceans and Fisheries has prohibited the transport and unloading of some hazardous cargoes, including styrene monomer, at several terminals under the Ulsan bridge. 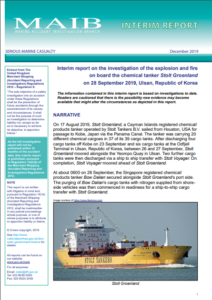