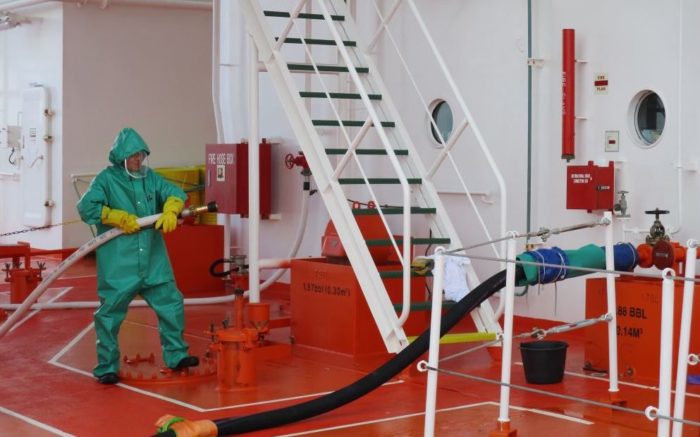 The Port of Rotterdam is the first port globally to provide caustic soda to those switching to scrubbers, so that they're able to wash the exhaust gases in the closed loop system, in light of the upcoming 2020 sulphur cap.

Keeping in mind the fuel switch by 2020, vessels will need to use with sulphur levels of up to 0.5% as of 1 January 2020. Yet, an additional option available is that shipping companies will be able to continue to use heavy fuel oil if they install ‘scrubbers’ on their vessels to purify the exhaust gases with a wash treatment of water and soda.

Now, Rotterdam is prepared for the new situation approaching, offering an optimal service to those shipping companies that have decided to use scrubbers so they can continue to stoke traditional heavy fuel oil. Scrubber waste can be collected and processed, and caustic soda can be bunkered ship-to-ship.

Amsterdam and Rotterdam are the only ports in the world where this is allowed, although it’s never been done in the capital city.

You need caustic soda for scrubbing to neutralise the sulphur dioxide levels in the exhaust gases. You can optimise the scrubber operation by checking the pH balance.

Yet, a challenge faced by those using caustic soda is that it is a crystal that dissolves in a 50% water solution but that does have a high specific gravity. This means that a pump from a tanker often has insufficient power to pump emulsion from the quay upwards to a seagoing vessel’s engine room. Mr Bouman added that Rotterdam's bunker vessels carry 8-bar pumps, which can do this job without problem. Rotterdam is actually the only port in the world to do this.

There are examples of vessels that approached the three ports for caustic soda but where loading was unsuccessful; they were, however, able to bunker ship-to-ship in Rotterdam.

Additionally, when arriving at Rotterdam, a seagoing vessel needs about 30 and 200 tonnes of caustic soda per bunkering. Although until now this kind of bunkering has been conducted a couple of times a months, there is now a steady increase, while a rise is expected from 2020.

Rotterdam’s VT Group has over twenty years’ experience in transporting caustic soda from companies including Akzo Nobel. Some eight inland vessels are involved in this in Western Europe, of which four operate from Rotterdam.