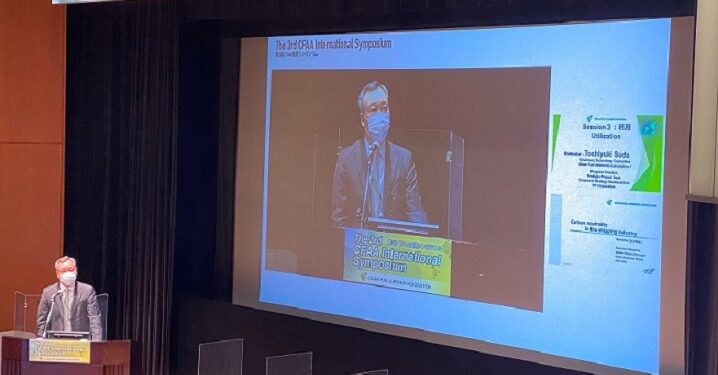 NYK participated in an international symposium on clean fuel ammonia held on November 24 at Japan’s National Museum of Emerging Science and Innovation (Miraikan).

This event was organized by the Clean Fuel Ammonia Association. At this year’s symposium, the third of its kind, sessions and panel discussions were held under the theme “Toward Early Social Implementation of the Fuel Ammonia Value Chain” from the perspectives of “Current Status and Issues,” “Supply,” and “Utilization.”

This new conference raised international awareness of ammonia as a direct fuel (i.e., the concept of “fuel ammonia”) and promoted the introduction and expansion of fuel ammonia.

At the same time, brought together oil- and gas-producing, renewable-rich countries on the need to establish a stable, low-cost, and flexible fuel ammonia supply chain and markets.

From NYK, Tsutomu Yokoyama, general manager of the Green Business Group, took the stage in the “Utilization” session to explain the trend toward zero emissions in the shipping industry.

He then introduced NYK’s zero emissions initiatives and the development of ships equipped with Japan-made ammonia-fueled engines using the Green Innovation Fund.

In addition, Toshi Nakamura, NYK executive officer, participated in a panel discussion and deepened the discussion among international organizations, industry groups, and companies on the efforts and challenges to establish a fuel ammonia value chain.

To remind, NYK joined forces with IHI Power Systems and Nihon Shipyard for the commercialization of vessels equipped with a domestically produced ammonia- fueled engine.

Concluding, NYK Line has set a long-term target of net-zero emissions of greenhouse gas (GHG) by 2050 for its oceangoing businesses.