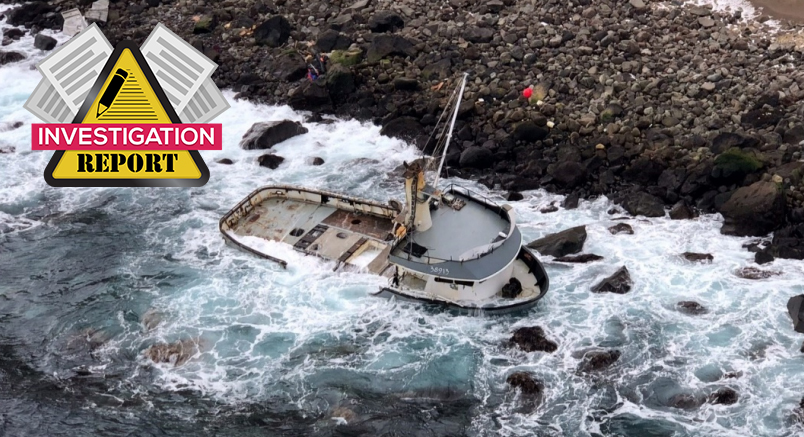 The NTSB issued an investigation report on the grounding of the fishing vessel Freyja while on the Bering Sea, Alaska, in March 2019. The investigation revealed the deckhand failed to monitor the vessel as he fell asleep due to extreme fatigue.

About 0155 local time on 9 March 2019, the commercial fishing vessel Freyja was longline fishing in the Bering Sea near Point Tebenkof, Unalaska Island, Alaska, when the vessel grounded and remained stranded on the rocks.

The four crew members abandoned the vessel and swam to a nearby Good Samaritan vessel.

The vessel was considered a total loss, with damage estimates at $550,000.

There were no reports of injuries or pollution.

The NTSB determines that the probable cause of the grounding of the fishing vessel Freyja was the failure of the deckhand on watch to monitor the vessel’s track as a result of falling asleep due to an accumulated sleep deficit and the vessel owner’s lack of countermeasures to mitigate crew member fatigue.

The Freyja was equipped with a bridge watch alarm, which worked by requiring the navigation watchstander to reset the alarm at preset time intervals in order to prevent the watchstander from falling asleep for a prolonged period.

If the watchstander did not reset the alarm, audible and visual alarms would activate. Deckhand 1 stated that he believed the watch alarm was set to sound every 10-15 minutes.

However, he was asleep in the wheelhouse for about 2 hours before the Freyja grounded, indicating that the alarm either was not set or was not loud enough, or the deckhand was extremely fatigued.

Although the captain stated that he gave the crew 4 hours of rest at a time when he could, he did not have a formal policy for work and rest that would have ensured the crew had the opportunity for uninterrupted sleep during their off-duty hours.

Moreover, this irregular watchstanding schedule, where crewmembers stood watch for random short shifts (not a 4/8/4 or 12/12 shift) and crewmembers were responsible for waking their relief when their watch was ending, compounded the likelihood of a single point of failure, where, if the on-duty watchstander became incapacitated for any reason (sleep, medical emergency, etc.), he could not notify his relief, and the wheelhouse would be left unattended.

The National Transportation Safety Board (NTSB) has investigated several fishing vessel accidents in which fatigue played a primary role. The latest investigation was the grounding of the Imperial, where the crew worked for 4 consecutive days with minimal and fragmented sleep periods, similar to the Freyja grounding.

In several investigated accidents, including the Freyja grounding, the economic pressure to operate continuously encourages working longer hours with little to no sleep in order to fill quotas.

Additionally, the grounding of the Freyja occurred at 01:55, a time where circadian rhythm is at a low. The circadian rhythm dips and rises at different times of the day, and, according to research, an individual’s strongest sleep drive generally occurs between 0100-0500 and 1300–1500 (extensive research has shown that this window varies based on a number of individual factors).

The fatigue experienced during these circadian lows is exacerbated when a person is sleep-deprived. Some effects of fatigue include lapses of attention, diminished decision-making ability, slowed responses, and an inability to concentrate.

As the NTSB has previously noted in numerous commercial fishing vessel accidents, crew fatigue is a significant contributing causal factor.

An effective way to prevent fatigue among crewmembers is for owners/operators to have measures in place to ensure that crewmembers receive enough rest to adequately perform navigational and lookout duties.

Marine safety training and periodic drills are designed to provide crewmembers with the knowledge and skills they need to respond to vessel emergencies.

For lifesaving equipment to be effective, vessel owners/captains should ensure that each individual on board is aware of how to don an immersion suit or other personal flotation device, and understands how to use the equipment correctly.

It is also the responsibility of each crewmember to ensure that immersion suits are the proper size, in serviceable condition, and readily accessible. 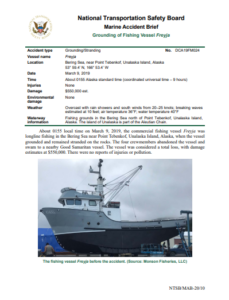