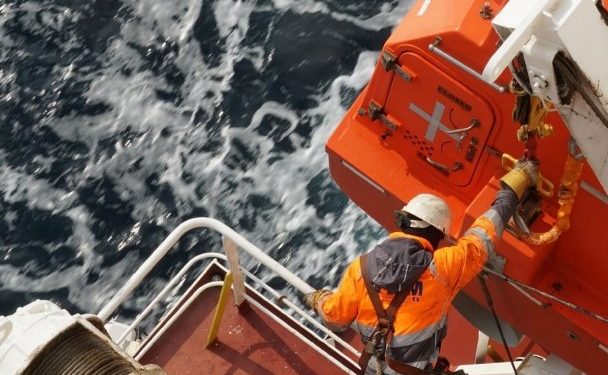 In its latest monthly safety scenario, the Swedish Club describes an incident where the Second Officer and an AB fell overboard, after a lifeboat swung violently.

The vessel was preparing to carry out a lifeboat drill, during good weather, and whilst it was alongside loading cargo.

The vessel had just completed a scheduled drydocking, and this was the first loading afterwards. An external company had carried out the required five-year replacement of all wires for the lifeboats and the fast rescue boat. They had also completed the annual inspection of the hydrostatic unit, dynamic test of the winch break and the on-load test, which is also mandatory every five years.

The crew had also carried out some maintenance on the lifeboats and replaced old ropes and other equipment. Following the maintenance and tests the Chief Officer inspected the lifeboats. He found that the bowse tackle ropes were too large to be held on the bitts. He wrote this down and told the bosun to fix this when he had time. The drill began, and one of the lifeboats was lowered, starboard side, and held alongside the embarkation deck.

The lifeboat’s bowsing tackles were rigged and the crew boarded the lifeboat. An AB who had just signed on joined the crew in the lifeboat, he was to be forward and release the hook when the lifeboat touched the water. This was only his second day on board and he had not received any training about his safety duties, but the Chief Officer planned to guide him through the drill.

The Chief Officer ordered the tricing pennants to be released. This was not a problem for the engineer on the stern of the lifeboat. The AB did not really understand what he was required to do and could not release the pin securing the tricing pennant hook release lever. The Second Officer, who was in charge of the lifeboat, left the steering wheel and crawled onto the roof to assist the AB. Neither were wearing safety harnesses, but were wearing life jackets.

However the Second Officer had not zipped up his lifejacket as it was a little tight. The Second Officer finally managed to remove the pin, but at the same moment the AB moved, causing the forward bowsing rope to come free. The lifeboat swung violently causing them both to lose balance and fall overboard into the water, which was 15m below them.

The AB signalled from the water that he was OK, but the Second Officer could not be seen, and only his life jacket was visible floating on the surface.

When discussing, the Swedish Club urges operators to consider that the actions taken at the time made sense for all involved, by asking the following questions: