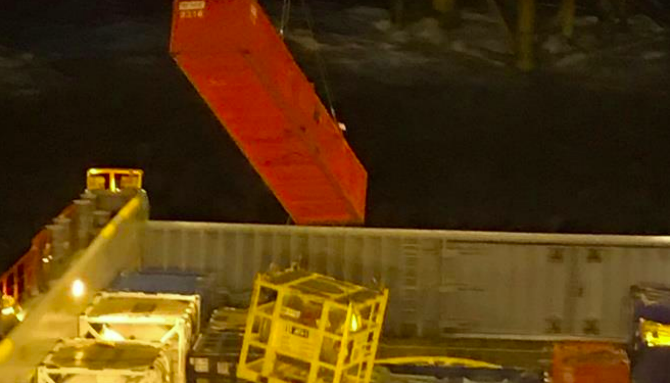 Through a recent Safety Alert, the Marine Safety Forum (MSF) describes a case of cargo snagging during lifting operations. The incident highlighted the need for improvement in deck space management and planning.

A vessel was engaged in deck cargo operations at an offshore location. A number of lifts had been successfully discharged and backloaded which led to limited space on deck.

As the crane operator began to lift the basket off the deck, the vessel bridge team noticed a corner of the basket had become snagged on a heli-tank and called an ALL STOP.

The call was not acknowledged, and the crane operator continued to hoist. As the 25ft basket was raised approximately 3m above the deck, the snagged lift was suspended approximately 0.5m and the ‘Stop’ call was given again by the bridge team. The crane operator continued to hoist causing the basket to rotate over the adjacent cargo and a third ‘Stop’ call was issued by the bridge team.

In this case, there were no personnel injuries or property damage however the potential for harm still existed where it could have been prevented.