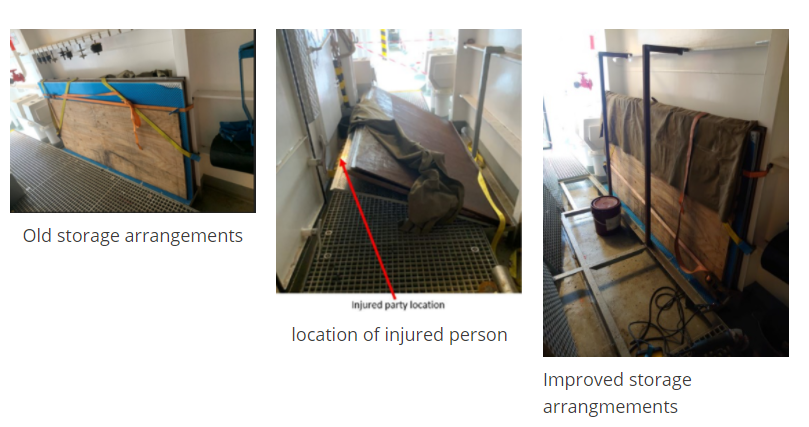 In its latest Safety Flashes for January, the International Marine Contractors Association (IMCA) analyze a case where a secured material fell against crewman causing injury.

A crewman was injured when a stack of assorted sheet metal and wood fell against him.

The incident occurred when he was performing a safety walk round in preparation for a period of rough weather.

He identified that the material was not secured sufficiently; it was seen to be rocking against the vessel’s superstructure.

This material had previously been stored in an area without any protection from outside environmental conditions.

It had been decided some 6 months previously, to move it to its present position, a covered passageway.

The sheets of material were secured with two webbing cargo ratchet straps hooked onto the surrounding ship’s superstructure.

In the process of removing slack from one of the webbing straps, the other loosened, resulting in both straps disengaging.

At that point, movement of the vessel caused the unsecured rack to fall towards the crewman.

As IMCA stated, he was unable to prevent the rack from falling on him and became pinned under the sheet material with most of the weight being taken on his right thigh.

He called for help from a nearby colleague and was rescued. The following day he was able to visit a hospital ashore for X-rays to his leg, where no fractures of bones were detected, and he returned to his duties on board.