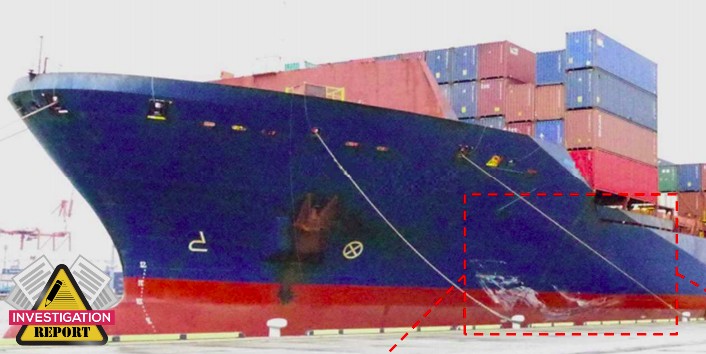 JTSB issued an investigation report on the collision of the container ship APL PUSAN and cargo ship SHOUTOKUMARU off Keihin Port in October 2019.

While both vessels were proceeding northwest bound in Uraga Suido Traffic Route on October 15, 2019, around 04:22, they collided on the Traffic Route, and APL PUSAN subsequently collided also with a light buoy.

APL PUSAN suffered a dent on its port bow, SHOUTOKUMARU’s bulwark bow suffered damages, etc. while the light buoy’s guard frame suffered a dent, but there were no casualties on either vessel.

When the officer of SHOUTOKUMARU received information from Japan Coast Guard TOKYO WAN Vessel Traffic Service Center (Tokyo MARTIS) that the ship was obliged to navigate the Nakanose Traffic Route, he turned to starboard toward the Nakanose Traffic Route without knowing the existence of APL PUSAN on the starboard quarter, which led to the collision.

Following investigation, JTSB noted it is necessary to implement the following measures to prevent the recurrence of similar accidents:

explore more in the full report