Failure to follow procedures leads to collision with bridge

The Japan Transport Safety Board issued a report concerning the collision of the 25,431-ton cargo vessel ERNA OLDENDORFF, with the Oshima Bridge, in Obatake Seto, Yamaguchi Prefecture, Japan, during the early hours of Monday, October 22, 2018.

It was 00:27 on Monday, October 22, 2018, when ERNA OLDENDORFF collided with Oshima Bridge, as was proceeding east in Obatake Seto towards a privately-operated berth in Etajima City, Hiroshima Prefecture.

A master, a second officer and 19 other crewmembers were present at the time. The vessel suffered dents and other damage to three of its four cranes as well as a bent damage to its aft mast, yet, no fatalities or injuries were reported.

The Oshima Bridge undergone cracks, dents, and further damage to its girders. Further to this, an inspection passage installed under the girders was broken and fell. A water pipe broke down causing a water outage which lasted for 40 days affecting almost all of Suo-Oshima Town in Yamaguchi Prefecture. There was also damage to some power and communication cables, amongst others.

The cargo vessel collided with the bridge, as it was

unable to pass through at the heights above the water line at the time of the accident to the top of each cargo crane and the aft mast.

Notably, the Master of ERNA OLDENDORFF approved the voyage plan, which was prepared by the Second Officer, including the route from Onsan to Etajima by Obatake Seto, without being aware of the exact height of the Oshima Bridge.

In fact, the Master may have not checked the exact details of the route thinking that the former master had already checked. Whatsoever, he continued to navigate after getting close to the bridge and feeling uncertain about its height.

The Master appears to have been waiting a report from the Second Officer concerning the height of the bridge. At the time, he was concerned that the vessel would be pushed toward shore by the westerly current, in the situation that the navigable width became narrower after it turned to starboard off the west of Kasasa Shima.

Lastly, it is likely that the Master and the Second Officer were insufficiently aware of the importance of complying with the specified procedures of voyage planning as seen in the Safety Management Manual issued by OLDENDORFF Carriers GmbH & Co.KG, which may have potentially contributed to the occurrence of this accident.

The Japan Transport Safety Board recommends to the OLDENDORFF Carriers GmbH & Co.KG

to thoroughly conduct education and training for masters and other crewmembers to ensure voyage planning and implementing in compliance with the Safety Management Manuals revised after the accident.

Further to this, the Japan Transport Safety Board advise the relevant authorities of the Republic of Malta to safeguard that the above is properly and continuously implemented. 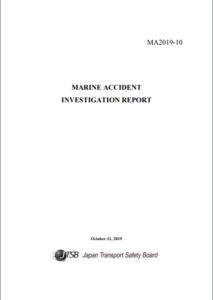