by Christophe Tytgat
in Opinions, Shipping 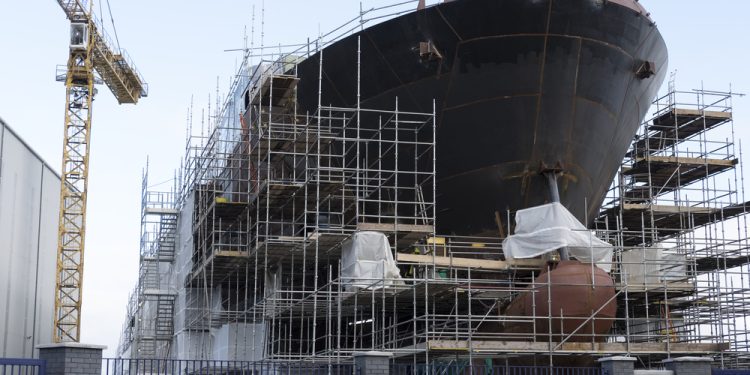 In an exclusive interview to SAFETY4SEA, Mr. Christophe Tytgat, Secretary General, SEA Europe, highlights key actions needed for the shipbuilding industry in order to remain resilient and competitive. Among others, it urgently needs a ‘true maritime industrial strategy’ that will support digitalization, automation, and autonomy of the ship as well as of the ship production process.

Albeit the challenges, Mr. Tytgat also shares his optimistic outlook for the shipbuilding industry, noting that the prospects in the market look promising, considering that new policies offer opportunities for the European shipyards to invest in zero-emission vessels. Concluding, he encourages European maritime stakeholders to cooperate more on issues of common interest and identify policies towards business growth.

SAFETY4SEA: First of all, could you briefly give us the profile of SEA Europe with information such as when it was created, how and what are your objectives?

Christophe Tytgat: SEA Europe was created in December 2012 following a merger between CESA (representing the European shipyards’ interests) and EMEC (representing the interests of the European maritime equipment industry). Hence, SEA Europe represents the interests of both the shipyards and maritime equipment manufacturers. SEA Europe’s members are national associations from the EU, Norway and Turkey.

The objectives of SEA Europe are multiple but in general they boil down to defending the sector’s interest (lobbying) and providing all kind of services to the members (such as monitoring policy and regulatory developments, monitoring and forecasting market developments, etc.).

S4S: What are the top priorities in SEA Europe’s agenda for the next five years?

Chr.T.: The top priorities for the next 5 years are as follows:

S4S: From your perspective, what are the key challenges that the European shipbuilding industry is currently facing? What are your suggestions to move forward?

Chr.T.: For shipbuilding the key challenges can be summarised as follows:

S4S: How would you describe the prospects in the market? How has the crises (both the pandemic and the war) affected the landscape? What are your suggestions the European shipyards to remain competitive?

Chr.T.: In principle, the prospects in the market look promising. Indeed, policies such as the European Green Deal and the Fit-for-55 legislation offer the prospect for European shipyards to build zero-emission vessels or to retrofit existing vessels into greener or zero-emission ships. However, the pandemic crisis and the war in Ukraine have negatively impacted Europe’s shipbuilding industry. The pandemic has particularly affected passenger ships, including cruise ships, which are still a European-built product. The pandemic crisis has also further aggravated competitive distortions in that Asian shipbuilding nations supported the survival of their local shipyards with additional state aid, on top of already existing state aids. In contrast, Europe did not apply any specific state aid and left the initiative to apply measures in support of local shipyards to the individual Member States. Unfortunately, most of them did not use the money from EU Next Generation to support the greening and digitalization of shipping, thus did not support local shipyards able and willing to build such green and digital vessels.

To regain competitiveness, the EU should apply a two-fold strategy, i.e. (a) close the unique legal gap in trade defence instruments which has prevented European shipyards so far from applying trade defence measures, such as anti-dumping measures, and (b) introduce urgently a maritime industrial strategy that boosts the competitiveness of and business opportunities for European shipyards, inter alia, through legislation combatting injurious pricing of vessels and through support for fleet renewal and retrofitting to speed up the greening of shipping.

S4S: What are the key actions that will make a step change in industry’s performance across a more sustainable future?

Chr.T.: A stepping stone for the shipbuilding industry would be the adoption of a true maritime industrial strategy, aiming at making the sector more resilient, globally competitive, green, and digital. To that end, specific actions – either policy measures, legislation and/or financial support – will be key. These actions should certainly facilitate a regaining of the industry’s competitiveness, inter alia, by tackling unfair competition from Asia; a policy that turns the goals of the European Green Deal into a real business opportunity and measures that support digitalization, automation, and autonomy of the ship as well as of the ship production process.

S4S: What lessons has the industry learned with the pandemic? Where should we improve for a future crisis situation?

Chr.T.: The main lessons from the pandemic crisis have been that Europe has become too dependent on few niche markets of complex shipbuilding and on Asia’s shipbuilding industry, with a negative impact of the sector’s resilience in Europe and on Europe’s maritime strategic autonomy. Another lesson is that countries like China and South Korea do – and continue to do – whatever it takes to support their local shipyards and their supply chain as they consider this sector as strategic for the economy as well as for geo-political reasons. Regrettably, the EU has not yet done whatever it takes to support and protect its own shipyards and their supply chain, even though it rediscovered and recognized the strategic dimension of the shipbuilding sector some years ago.

S4S: What is your key message to industry stakeholders with regards to the future of European shipbuilding industry?

Chr.T.: European maritime stakeholders should cooperate much more on issues of common interest, e.g., through a dedicated Maritime Expert Group. In such group, the sector’s common challenges and opportunities can be mapped and discussed with an aim at identifying the relevant policies, legislation, and support to boost the sector’s resilience and competitiveness and to create the framework conditions for business opportunities, jobs and ultimately prosperity. European shipowners should reconsider buying and building more in Europe, despite the price differences with Asia, in order to reduce their dependency – and thus vulnerability – on Asia’s shipbuilding industry.

On 1 March 2016, Christophe Tytgat was appointed as Secretary General of SEA Europe – the Shipyards’ and Maritime Equipment Association of Europe. SEA Europe defends the interests of the civil and naval shipyards as well as maritime equipment industries in Europe, Norway, and Turkey. Through its sister- association CESA, SEA Europe defends these interests also in the IMO. In his capacity of Secretary General, Christophe has been board member of the research association “Vessels for the Future” and of the “Waterborne Technology Platform”. He currently is a delegate in the EESC CCMI. Before joining SEA Europe/CESA, Christophe has worked for about 15 years in various positions in the European Community Shipowners’ Associations (ECSA) and, before that, he has worked for about three years in the Belgian federal administration, first with the Foreign Affairs Office and then with the Maritime Transport Administration. Christophe holds degrees in Law, International Relations and East-European Studies from the University of Leuven and a degree in International and European Law from the University of Brussels. He also followed management courses. Christophe is a Belgian citizen. He speaks Dutch (native language), French and English and has knowledge of German, Italian and Russian. He is married with two daughters.