The frequency and cost of collision, grounding and fire incidents has increased in some areas for Asian-based ship owners and managers, but the number of total losses as a whole has reduced significantly over the past 12 months, said Allianz in its recent Shipping and Safety review 2019, recommending that newer infrastructure, better port operations and more up-to-date charts would help to address some of these issues.

In 2018, a quarter of shipping total losses occurred in the South China, Indochina, Indonesia and Philippines maritime region.

However, this region’s loss total of 12 is significantly down year-on-year and is at its lowest for at least a decade.

We have seen a rise in incidents involving car carriers, which are becoming more expensive. This is a major concern with fires on the Auto Banner in May 2018 and most recently the Sincerity Ace in January 2019, 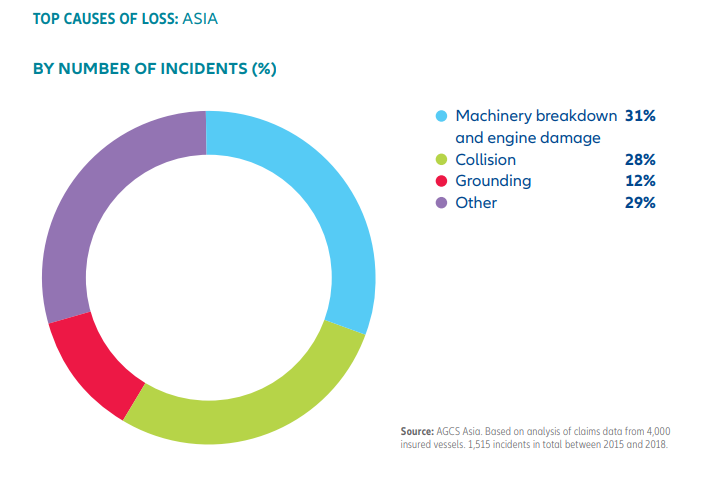 We do typically see more incidents of groundings and collisions in Asia than other locations around the world, but this generally reflects the higher levels of trade and where ship owners are trading. In many cases port infrastructure in Asia is new and there are many new or expanding ports in China, Korea, Japan and Malaysia etc. Newer infrastructure means fewer issues, better port operations and more up-to-date charts,