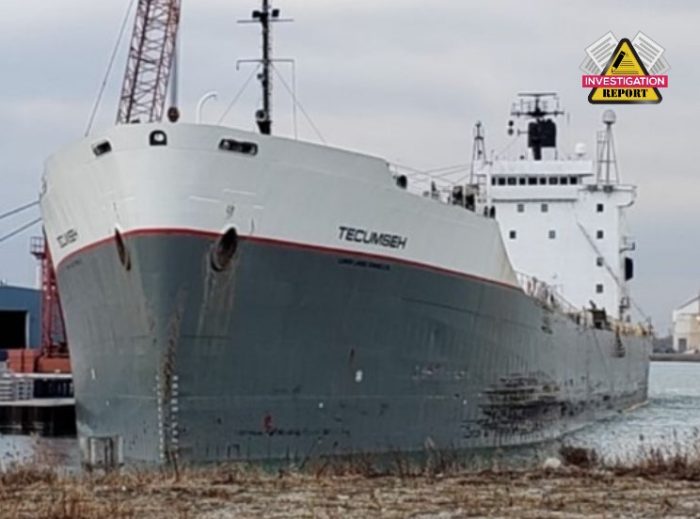 The Transportation Safety Board of Canada (TSB) published its report on the 15 December 2019, involving the bulk carrier Tecumseh, that had a fire in the engine room while transiting the Detroit River off Windsor, Ontario.

On 13 December 2019, the Tecumseh departed Thunder Bay, Ontario, for Windsor, Ontario, loaded with 19 667 tonnes of canola seed in bulk. By 15 December at 1343, 4 the Tecumseh was downbound in the Detroit River, passing the Ambassador Bridge, which connects Detroit, Michigan, U.S., with Windsor. The bridge team consisted of the master, a helmsman, and the second officer. The engine room team consisted of the third engineer and an engineering assistant.

The master immediately sounded the general alarm, used the vessel’s public address system to instruct all crew members to muster, and ordered the helmsman to alter the Tecumseh’s course toward the Canadian side of the river. As none of the crew assigned to muster in the ECR could proceed to the engine room due to the dense smoke, all crew, with the exception of the bridge team, proceeded to the muster station on the main deck aft of the superstructure.

Concurrently, the master used the vessel’s very high frequency (VHF) radiotelephone to report the emergency to Marine Communications and Traffic Services (MCTS) in Sarnia, Ontario. The Canadian Coast Guard (CCG) vessel Limnos was put on stand-by through the Joint Rescue Coordination Centre (JRCC) in Trenton, Ontario. At 1411, the Tecumseh anchored near the Morterm Ltd. terminal in the Port of Windsor (Appendix A). The master then shut down both main engines from the bridge.

At 1412, crew members had mustered on the main deck with their lifejackets and survival suits. All 16 crew members were accounted for.

The master ordered the crew to proceed with their assigned duties per the vessel’s muster list. Two of the deckhands went to retrieve the firefighter outfits, and other crew members began closing the engine room’s ventilation fire dampers. The master and the chief engineer conferred, using the internal telephone system, and decided to use the engine room’s carbon dioxide (CO2) fixed fire suppression system.

At 1423, the master called Lower Lakes Towing Ltd. (LLT), the company that owns and manages the Tecumseh, and reported the situation. At 1429, the master reported to MCTS that the fire was under control and contained in the engine room, and that no assistance was required. Shortly afterward, the Limnos was stood down by JRCC Trenton.

At 1430, some of the crew were tasked to rig fire hoses to prepare for boundary cooling. The 2 deckhands who had retrieved the firefighter outfits were asked to don them. The deckhands stated that they had not taken Marine Emergency Duties (MED) training and therefore could not act as firefighters.

#1 Engine room maintenance: Considering the critical function of propulsion machinery to the safety of a vessel and its crew, it is essential that engine room equipment and systems be well maintained and that engine room practices minimize risk. The failure of the engines or other machinery or components in the engine room may pose significant safety hazards and, in some cases, create fire risks if these failures occur near ignition sources or flammable materials.

#2 Structural fire protection: Fire pattern analysis indicated that the fire originated in the port-forward area of the lower platform around the engine. The separated fuel oil supply line sprayed fuel onto the engine and hot exhaust components, igniting the fuel. Fuel sprayed onto the engine for approximately 5 minutes, until the engine was shut down from the bridge. The fire spread aft along the electrical cable trays, through unsealed penetrations in bulkheads, finally entering the ECR. Only traces of sealant were present at the time of the occurrence, and it is likely that the sealant had been removed and not replaced in 2005 when the auxiliary generators and associated cables were replaced by a previous owner.

#4 Safety management systems: Safety management requires all organizations to be cognizant of the risks involved in their operations and to competently manage those risks. An effective SMS can help to ensure that members at all levels of an organization have the knowledge and the tools to manage risk effectively, as well as the necessary information to make sound decisions in any operating condition, including both routine and emergency operations.

#5 Voyage data recorder: In this occurrence, the Tecumseh did not have a VDR on board, nor was one required by regulation. Consequently, investigators could not confirm engine orders and the timing of emergency response actions, or gain a complete picture of internal and external communications.

The investigation determined that the fire on board the Tecumseh originated on the port main engine after a flexible fuel hose assembly supplying fuel to the main engine failed.

The analysis will examine engine room maintenance, the effectiveness of the vessel’s structural fire protection and emergency equipment, and the decision to re-enter the engine room after the fire had been initially suppressed by the carbon dioxide (CO2) fixed fire suppression system.

Findings as to causes and contributing factors:

Findings as to risk: