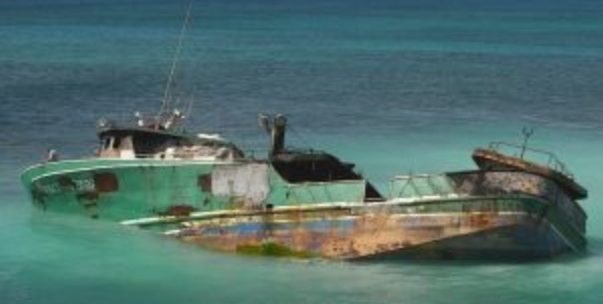 Responders prepared on Thursday to remove the 79-foot fishing vessel 'Pacific Paradise' that grounded off Waikiki, US Coast Guard informed. The 'Pacific Paradise' is a U.S. flagged vessel and part of the Hawaii longline fishing fleet based in Honolulu.

After reports that the vessel grounded off Diamond Head near Kaimana Beach, the Coast Guard and the Honolulu Fire Department responded and rescued the master and 19 fishermen from the vessel at late night of October 10. The crewmen were released to U.S. Customs and Border Protection.

The vessel remained grounded despite several initial attempts to tow it from the reef located off Waikiki’s Kaimana Beach during favorable tides.

A salvage team was able to approach the vessel for the first time post fire, on Wednesday, to survey the damage, assess the hull and inspect for pollution.  Nearly 3,000 gallons of diesel fuel and other debris was removed from the vessel and marine contaminants continue to be removed as well.

USCG informs that a safety zone remains in effect around the vessel with a span of 500 yards in all directions.

NOAA crews are standing by to assist marine mammals as necessary, none have been affected thus far.

The cause of the grounding remains under investigation.