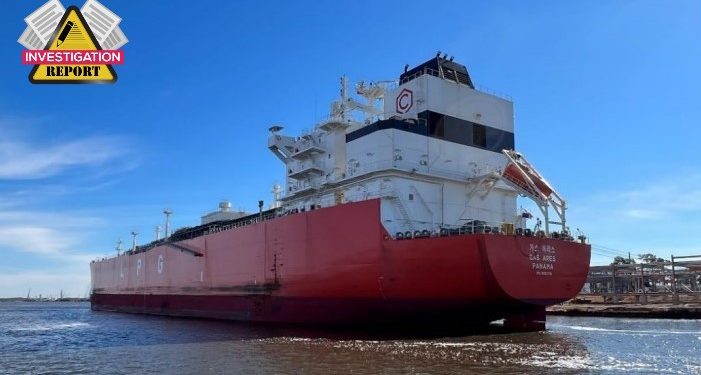 NTSB published its accident report on a November 25, 2021 accident, when the liquefied petroleum gas carrier Gas Ares collided with the outermost of two harbor tugs moored alongside the no. 1 loading dock at the Motiva Port Neches Terminal.

On November 25, about 1736, the Gas Ares got underway from the anchorage area headed toward the sea buoy for the entrance to Sabine Pass. The vessel’s draft was 6.4 meters (21 feet) forward and 8.2 meters (26.9 feet) aft. About 1748, a state-licensed pilot from the Sabine Pilots boarded the Gas Ares near the sea buoy. After arriving on the bridge, the pilot and master conducted a master/pilot exchange; the master provided the vessel’s critical dimensions and handling characteristics, while the pilot provided the expected weather, current, traffic conditions, and the plan for the use of assistance tugs. The master reported there were no defects or deficiencies related to navigation, communication, steering, or propulsion systems.

To reach the loading dock, the Gas Ares had to transit through the Jetty Channel, Pass Channel, Port Arthur Canal, Sabine Neches Canal, and Neches River. The pilot stated that because of the wind conditions, which were predicted to be 18–25 knots from the north, she planned to have one escort tug. The Hayley Moran (a 6,000-hp tractor tug) was to meet the vessel at the Texaco Island intersection and accompany it through the Sabine Neches Canal and Neches River. Additionally, she requested a second tractor tug be available to assist in turning the ship for the maneuver to the Sunoco Logistics dock.

At 2152, the Gas Ares passed through the Rainbow Bridge and proceeded upbound on the Neches River. At 2208, the pilot on the Gas Ares hailed the downbound towing vessel Chad Douglas, which was pushing two loaded tank barges in a single line ahead (measuring 688 feet long by 54 feet wide) and arranged for a starboard-to-starboard passing. At the time, the LPG carrier was transiting at 8.1 knots at a half-ahead propulsion order (61 rpm).

At 2225, with the Gas Ares passing the moored Wonder Polaris closely to port, the pilot ordered “five short blasts” of the ship’s whistle, which she later told investigators was to “alert everyone.” She then requested of the Hayley Moran, “give me what you got; starboard 45°.” Simultaneously, she issued multiple rudder orders—hard to starboard, midship, and hard to port—and ordered the engine full ahead (71 rpm), then half ahead 30 seconds later, followed by stop engine 18 seconds afterward. At 2226, with the port stern of the Gas Ares still closing on the Wonder Polaris, the pilot requested dead slow ahead, followed seconds later by slow ahead and stop engine.

The Motiva no. 1 loading dock, which had two harbor tugs moored side by side alongside the dock, was ahead of the Gas Ares on the south shoreline on the LPG carrier’s port bow. The tug Sabine was outboard on the channel side with the tug Florida moored inboard and alongside the dock, both facing up river.

The Gas Ares continued ahead at 4.1 knots, and the pilot saw that the vessel’s bow was moving toward the tugs moored at the Motiva no. 1 dock. Consequently, she issued the following orders in quick succession: 1) the Hayley Moran pull full to starboard; 2) rudder amidships; 3) again sound “five short blasts” of the ship’s whistle; 4) let go the starboard anchor; and 5) engine emergency full astern. The bridge team complied with her orders.

On board the Sabine was a crew of four; the captain had been in his stateroom when he heard a ship’s whistle. He went to the wheelhouse, where he saw the Gas Ares approaching. He rang the general alarm, and the engineer started the main propulsion engines. Recognizing the Gas Ares was going to hit them before they were able to get underway, the tug captain announced to the crew over the public address system to “hang on.”

On the Gas Ares’s bow, a crewmember released the starboard anchor at 2227, and at the same time, as the bow continued to fall to port, the Gas Ares’s port bow collided with the Sabine on its starboard side. The Sabine’s mooring broke, and the tug was pushed into the adjacent tug Florida and moved up river. The Florida, which had four crewmembers on board, was driven against the dock but remained moored.

As the 106-foot-wide Gas Ares was transiting through the Neches River at half ahead at 8.1 knots, at 2208, the pilot of the Gas Ares hailed the outbound 688-foot-long tow Chad Douglas and proposed a starboard-to-starboard passing. Setting the vessel up to meet the tow, the pilot of the Gas Ares favored the left (south) part of the 400-foot-wide navigation channel—the same side where vessels were moored at the Huntsman and Motiva docks.

At 2212, about 4 minutes after arranging the passing, the pilot ordered the Gas Ares to dead slow ahead to avoid making a wake as the LPG carrier passed a pipeline removal project (to starboard outside of the navigation channel), and about 6 minutes later, the vessel was only making about 3.8 knots. The pilot’s decision to order the vessel’s speed reduced in anticipation of passing the pipeline removal project was what initiated the eventual collision with the Sabine at the Motiva no. 1 dock.

As the Gas Ares approached the Huntsman dock (where an ATB was moored), Motiva dock no. 2 (where the 144-foot-wide tanker Wonder Polaris was moored), and the Chad Douglas tow, the pilot faced a close-quarters passing with the vessels moored at each dock. The pilot had the tug Hayley Moran—which had been made fast to the stern of the Gas Ares—pull the Gas Ares’s stern to starboard to keep it from falling onto the Wonder Polaris.

At the same time, she issued rudder and engine orders intended to keep the LPG carrier from falling farther south and point its bow back into the channel. North-northwesterly winds at 18–27 knots exerted pressure on the exposed (in-ballast) starboard-side hull above the waterline (the 0.4-knot current likely had little impact on the immersed portion of the hull). Thus, the vessel—which was already on the left side of the narrow channel for the passing arrangement with the Chad Douglas tow—was set farther toward the left and the Huntsman and Motiva docks.

With the pilot’s ordered reduction of the ship’s speed, the Gas Ares’s rudder became less effective, and the pilot was not able to move the vessel to starboard and away from the nearby moored vessels by rudder and engine alone. The pilot’s efforts to use the stern tug to pull the Gas Ares’s stern back to starboard and the center of the channel caused the LPG carrier’s bow to point more toward the left side of the channel and moored vessels. Without enough headway, the pilot was unable to steer the vessel back to the center of the channel and avoid striking the moored Sabine at the Motiva no. 1 dock.

The National Transportation Safety Board determines that the probable cause of the collision between the liquefied petroleum gas carrier Gas Ares and the tug Sabine, moored alongside the tug Florida at the Motiva Port Neches Terminal no. 1 loading dock, was the pilot’s decision to reduce the vessel’s speed in order to create less wake when passing a pipeline removal project, causing a loss of rudder effectiveness in strong crosswinds that set the carrier toward moored vessels.