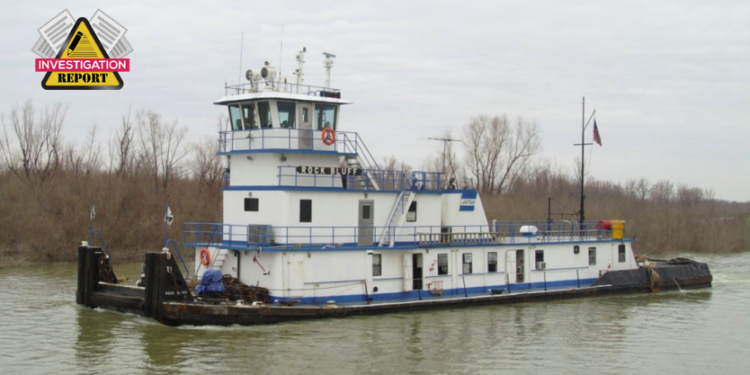 NTSB issued an investigation report on the fire and explosion onboard the towing vessel ‘Susan Lynn’, off Lousiana, in October 2019. The investigation identified a catastrophic engine failure as key cause of the accident.

On October 8, 2019, about 0600 local time, the Susan Lynn was docked and in layup status at Tom’s Marine & Salvage yard on the Barataria Waterway in Lafitte, Louisiana, when a fire started in the engine room.

The vessel’s watchman could not contain the fire and evacuated the vessel. Local firefighters extinguished the fire. No pollution or injuries were reported. Damage to the vessel was estimated at $1,350,000.

The National Transportation Safety Board determines that the probable cause of the fire onboard the Susan Lynn was a catastrophic engine failure resulting in an oil reservoir breach and an ensuing fire initiated by ejected lube oil igniting off a hot surface.

Contributing to the extent of the fire were the open engine room doors and the unsecured fuel shutoff valves.

See also: Preventing Engine Room fires onboard: How to prepare

The Susan Lynn was nearly 60 years old, laid up by its previous owner, and prevented from operating by the Coast Guard because of a substandard hull in need of gauging and repairs. Maintenance and the condition of the port generator were explored as potential causes of the fire due to the continual use of the port generator for about 63 days (1,512 hours) with the starboard generator out of service.

The heaviest fire damage was in the engine room, near the generators, with additional damage on the main and second decks forward of the galley. The vessel was equipped with fuel shutoff valves, which are intended to secure fuel to the engine and engine room in an emergency.

Had they been secured, there would have been less fuel available to feed the fire. The fire’s spread beyond the engine room was likely the result of the interior forward and after centerline upper engine room doors being left open while the vessel was laid up and remaining open throughout the fire.

While the vessel was in layup, the normal position of the engine room doors should have been closed, as a fire safety measure.

A rod and/or piston striking and then rupturing the oil pan would have released oil into the engine room under heat and pressure. This ejected lube oil mist may have ignited off a hot surface, potentially the generator’s unlagged (not insulated) exhaust components.

The intensity and duration of the fire was likely exacerbated by the melting of the bowl on the bottom of the generator’s Racor fuel filter combined with the vessel’s fuel shutoff valves not being closed, allowing additional fuel for the fire.