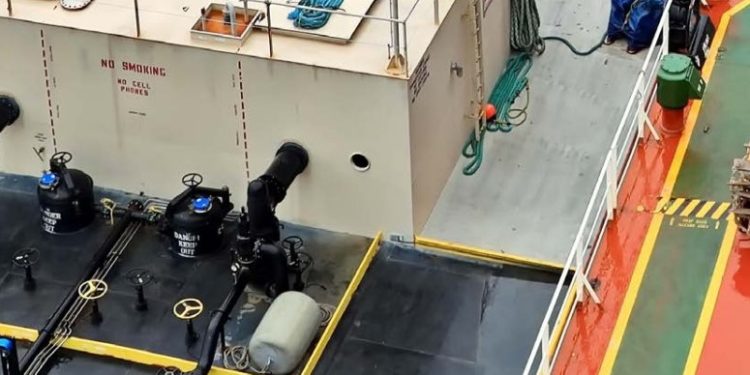 The Swedish Club published its latest monthly safety scenario, in which it analyzes an incident involving a corroded pipe that caused an oil spill.

The 15 year-old bulk carrier was in dry dock completing its third special survey. As usual there were also many other maintenance tasks being carried out at the same time, including the replacement of a section of a de-aeration pipe in the cargo hold.

The Chief Officer had discovered during a cargo hold inspection a month earlier, that the de-aeration pipe seemed to be corroded. This pipe led from the sea chest, passing through the cargo hold, then through a heavy fuel oil (HFO) tank and finally out through the vessel’s shell plate.

It was decided that the section of the pipe in the cargo hold should be replaced and that crossbars should also be fitted for protection against damage during cargo handling.

The vessel arrived in the morning at the discharge port to carry out bunkering operations. A bunker barge came alongside and the First Engineer completed the bunkering checklist. About an hour later the bunkering began. At this time the cargo operation had also commenced.

At lunchtime, one of the ABs discovered oil in the water, and informed the OOW in the cargo office. He came out on deck and could see oil trickling down the side of the hull. He went into the cargo office and made a general announcement about the pollution and on what side of the vessel the oil was escaping. Shortly after this he called the Master and informed him about the oil pollution. The Master informed the coast guard, harbour authorities and the DPA about the incident.

At this time the duty engineer also called the OOW and asked what was happening. The OOW told him about the pollution and asked if the bunkering had been stopped, to which the engineer said it had not. The OOW told him to stop bunkering immediately and then ran back onto the deck to join the Master and Chief Engineer. Oil was still escaping even though bunkering had stopped the Chief Engineer realised that the oil was escaping from the HFO tank, which was being bunkered and told the duty engineer to transfer all bunker from that tank into another empty HFO tank. When almost the entire bunker had been transferred the trickling ceased.

Shortly afterwards the harbour authorities arrived and placed oil booms and absorption pads around the vessel. The booms unfortunately did not prevent all of the oil from escaping. When all the bunker had been transferred and the tank was safe for entry, the HFO tank was inspected and it was discovered that the de-aeration pipe was fractured. The crew made temporary repairs to the pipe, but permanent repairs had to be completed at a shipyard. Replacement of the section of pipe in the cargo hold had caused stress to the section in the HFO tank.

Pressure testing should be carried immediately after work has been carried out on any pipework. The thickness of the entire pipe should be measured. If pipes passing through the HFO tank cannot be avoided, then these pipes should have an increased pipe thickness and should also have some kind of surface protection e.g. hot dip galvanizing or coated on the waterside.

When discussing this case operators should consider if the actions taken at the time made sense for all involved, by asking the following questions: