The UK MAIB, in its latest Safety Digest, describes how a ro-ro passenger ferry's propulsion system stopped out of the blue, discussing what caused the system to fail and how the lack of the crews' training impacted the situation.

Everything was running normally in a small inter-island ro-ro passenger ferry, until the time that it ran aground shortly after one of its two VoithSchneider propulsion units unexpectedly stopped. It was a fine day with a speed of 13 to 18 miles per hour, while the ferry was on a regular sailing with passengers and vehicles on board.

Almost five minutes later, the ferry has left its docking site and the back propulsion unit shut down. The engineer of the ferry, went immediately to the engine room, but his efforts to restart the aft engine were ineffective, since the propulsion unit's blades were not in ‘neutral’. He wasn't conscious of a button that allowed to the start interlock system to be overridden in an emergency (see image). 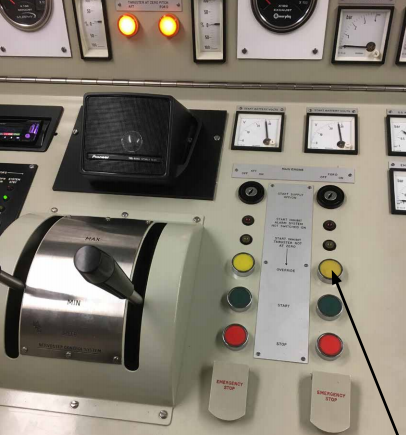 At the same time, the ferry drifted towards navigational dangers. Supposing that the engineer had taken action of both engines, the master who had remained on the bridge did not try to manoeuvre the ferry clear using the ahead propulsion unit. Still, he called the port authority and asked for tug assistance.

The master also stopped the front propulsion unit engine in order to reduce the harm to its blades. Shorty afterwards, the ferry grounded, but with a local tug's support soon refloated. No damage or pollution were recorded.

Concluding, investigation found that a fault in the shutdown system of the aft propulsion, was the main cause that stopped the propulsion. Another purposes of this failure, was the crew's unawareness of the vessel's controls, the onboard unclear technical information on the operation of the propulsion system in reversionary modes, and the vessel’s emergency drills did not include machinery breakdowns.