The Japan Transport Safety Board focuses on a fatality which took place during container loading operations at the Nabeta wharf, Yatomi city, Aichi Prefecture, where a Stevedore lost their life after he got caught between two containers, and was then pronounced dead by a doctor.

Accident type: Fatality of a stevedore

Stevedore B informed that the container had been grounded, through radio communication and the GC operator A responded to this information, and at that moment diverted his attention to the preparations for the next stage of loading container execution works.

After the whole incident, the other stevedores found Stevedore A caught between the container and the loader container. He tried to lean to the fore side container, stood and faced the aft side, but was injured leaving the container.

The report states that

nobody saw the precise moment when the accident occurred.

#1 The investigation reveals that a probable cause of this accident was that Stevedore A was caught between the Container and the fore side container which had already been loaded.

#2 Also, another probable factor was the radio communication, as the GC operator A received the information by the radio and diverted his attention to the preparation for the next stage of container loading execution works when the container had just been grounded on board because GC operator A hoisted the spreader without noticing that the spreader was not released from the container.

Following the investigation report, Japan TSB concluded to the following measures to prevent the recurrence of a similar accident. In essence:

The investigation recommends that

It is desirable that the indication lamps of the GC spreader are positioned where they can be easily seen from GC operation sheet. Rotary lamp light, etc. should be installed as well.

To learn more on the investigation report, click herebelow 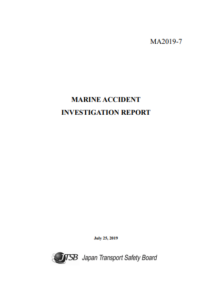