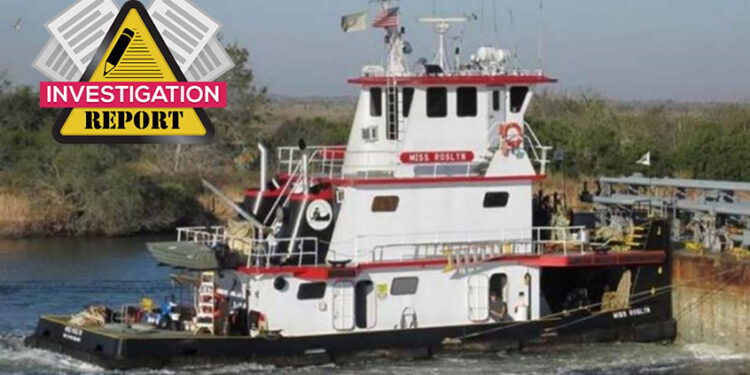 NTSB published its report on the capsizing of the towboat ‘Miss Roslyn’, on October 9, 2018. The towboat began to flood as well as list to starboard, eventually sinking. No injuries were reported, but an oil spill was reported.

On October 9, 2018, the three dayshift crew members (a captain and two deckhands) of the fleet towboat ‘Miss Roslyn’ began their workday on board the vessel at the CCI (Cooper Consolidated Inc.).

When the vessel got underway, it headed downbound towards the Upper Reserve Anchorage, hugging the right descending bank. A little later, the captain noticed a persistent list that was “more than the normal starboard list,”. He claimed that the list was because the ‘Miss Roslyn’ was “top-heavy,” and he made several round turns to starboard to attempt to mitigate the list.

The turns slightly reduced the list, making the captain comfortable to continue the downbound transit. A little later, the captain slowed the ship, reporting concerns to the port captain, and instructed the two deckhands to investigate the cause of the list.

The deckhands reported that despite the fact that the engine room was dry, the aft starboard main deck was awash with 4 to 6 inches of water, and they could not safely open the manhole covers to the starboard steering and flanking voids. The captain instructed the deckhands to open the manhole covers to the port steering and flanking voids and dewater them by placing a portable pump in each.

At 1639, the captain stopped at Fortyeight Mile Point in order to inspect the vessel. As the report says, the captain noted that:

The engine room was dry, but on the main deck, starboard side aft, water was coming through the freeing ports (but not over the bulwark) and had covered the deck about one foot

The Vessel Traffic Service (VTS) New Orleans automatic identification system (AIS) playback indicated that the Miss Roslyn was making 8.7 mph speed over ground while crossing the river. The Miss Roslyn’s senior deckhand stated that when the vessel was about mid-river, water started coming over the starboard bulwark, and about the same time, video from the Joanne Marie presented that the Miss Roslyn’s starboard list continued to increase, until the starboard bulwark was under water.

The port captain said to investigators he was first made aware of the Miss Roslyn crossing the river when the captain of the Joanne Marie called him and stated:

That ain’t looking good, he’s got, you know, his deck is on the wrong starboard side and we’re going to the east bank

VTS recorded the conversation on VHF radio channel 67. Between 1651 and 1654, VHF traffic recordings indicated the Miss Roslyn was listing, and assist boats had reached the vessel.

The captain stated that when the Miss Roslyn was about 50 feet from an empty moored fleet barge on the left descending bank, the list increased to a slow roll to starboard. When the Miss Roslyn touched the barge, the two deckhands jumped to the barge from the towboat’s push knees.

After that, the captain disembarked the Miss Roslyn by jumping from the stern onto the Kristy Dutsch. At 16:59:11, the Miss Roslyn continued to roll over until the vessel came to rest on the river bottom with about 5 feet of the port bow above the surface and the stern fully submerged.

After the accident, all crew submitted samples for drug and alcohol tests, which were negative. On October 10, marine salvage contractors and divers arrived on scene to perform an initial survey and close all doors and vents on the Miss Roslyn.

The vessel was refloated on October 14 and towed to a repair shipyard in Harvey, Louisiana.

After conducting an investigation, the National Transportation Safety Board concluded that:

The probable cause of the capsizing of the Miss Roslyn was the company’s lack of effective hull inspection and maintenance program, which resulted in flooding into a steering void through multiple wastage holes in the hull

You may see more information in NTSB’s accident report 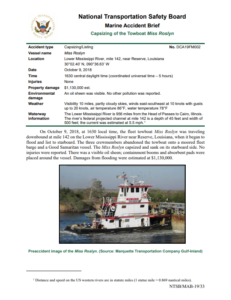