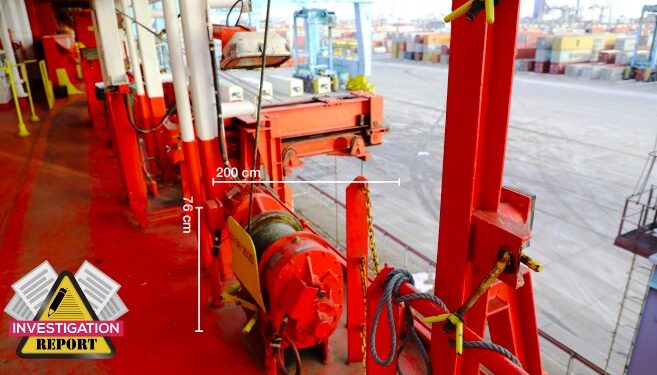 The site of the accident / Credit: DMAIB

On 7 February 2021, the Danish-flagged container ship SANTA CLARA was about to berth in the Port of Bremerhaven when an OS fell overboard while rigging the gangway. Despite extensive searches, she was never found and presumed dead. DMAIB issued an investigation report on the incident.

At 0245, the day man was woken by a call from the 2nd officer who told him to be on standby at 0330 by the pilot ladder and prepare for bringing the Bremerhaven port pilot onboard. The day man called an able seaman (AB), an ordinary seaman (OS), and the deck cadet and told them to prepare the accommodation ladder. Ten minutes later, they met in the locker room and donned their working clothes and personal protective equipment. It was a cold and windy morning, with a strong breeze and an air temperature of -5°C

Afterward, he went to the forward part of the accommodation ladder to see if he could identify the problem. As he walked forward, the OS went to the winch and held the slack wire. Suddenly, the accommodation ladder was released, fell down, and the wire was tightened instantly. From the control station, the deck cadet saw the OS being forcefully hurled overboard. The deck cadet immediately shouted “man overboard!”, and the AB turned around and saw that the OS was missing. The time was 0339.

Despite an extensive search, the rescue services did not succeed in finding the OS. Only the lifebuoys, thrown overboard from SANTA CLARA, were found. The search operation was concluded in the late afternoon on 7 February at 1709.

The witness testimonies suggested that the sudden release of the accommodation ladder was closely related to the OS being thrust overboard. However, this does not in or of itself explain why the OS was thrust overboard. There were other circumstantial factors that explicate why none of the crewmembers recognized the hazards of untangling the fall wire under the given circumstances.

Once the accommodation ladder system malfunctioned, the crewmembers found themselves in a unique situation, and there was thus no procedure or risk assessment to turn to.

None of the three crewmembers had any experience in neither fault finding nor manual operation of the accommodation ladder, because the automated lowering system did usually not require any manual intervention. This led them to improvise to understand and solve the problem at hand,

The AB did not report the malfunction to the bridge, because he was still in the early stages of fault finding and suspected that the problem could be immediately solved.

Meanwhile, the OS tried to avoid additional problems by apparently keeping the fall wire untangled on the winch which was a known problem for the crewmembers, and one they knew how to solve.

None of the crewmembers had reason to think that the malfunction of the accommodation ladder would resolve itself spontaneously causing it to be released.

This accident was thereby the result of a partly automated system that performed in an unexpected way, and the crew did not have the experience or system knowledge to immediately recognize the hazard it entailed when solving the immediate problem of the entangled wire.

The result was that the force of the falling accommodation ladder was transferred to the wire and the OS, forcing her overboard. There was no railing mounted on the ship’s side by the winch, which meant that only the winch stood between the OS and the edge of the upper deck. She fell 17 meters into the sea which had a temperature of 2°C. Under those circumstances, the OS’s survivability was time-critical.

In addition, the ship’s emergency planning, drills and exercises were based on the condition that the ship was in open waters which hindered an effective shipboard response to the situation, because the ship was manoeuvering in the confined waters of river Weser. Once the master realized that the shipboard emergency contingency measures were not designed to enable them to respond to the given situation, it became a matter for the coastal authorities to locate and retrieve the OS.

DMAIB received information that the company has initiated the following preventive actions as a response to the accident: