Decarbonising shipping – could ammonia be the fuel of the future?

by Charles Haskell
in Fuels, Opinions 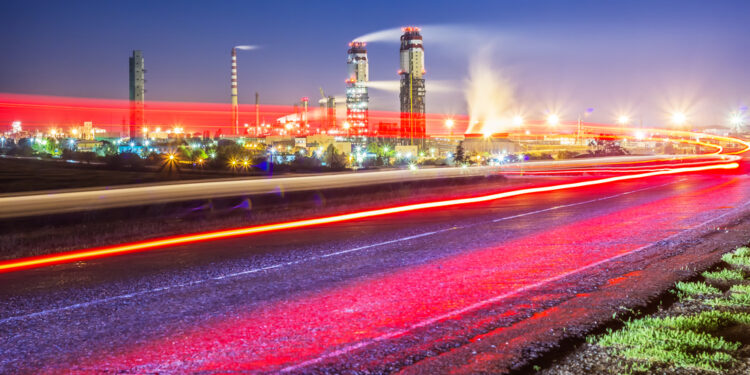 Charles Haskell, Decarbonisation Programme Manager at Lloyd’s Register, takes a close look at the benefits, drawbacks and current status of ammonia as a potential marine fuel as the shipping industry transitions to a zero-carbon future.

Today 80% of ammonia produced is used exclusively for the fertiliser industry. However, as pressure is placed on the shipping sector to decarbonise and shift away from reliance on fossil fuels, ammonia is looking like an attractive alternative. If 30% of shipping switched to ammonia to use as a fuel, then the current production would have to nearly double. There are challenges for up-scaling, but an even greater one for ammonia production to be carbon free which will come at a cost, but this also presents opportunity for both industries to reduce their carbon footprint and work together.

Ambitious greenhouse gas (GHG) reduction targets have been set by governments for the decades ahead. In advancing our economies from fossil-based fuels to alternative energy, every industry will be affected, including shipping. Regulators such as the International Maritime Organization (IMO) and European Union are turning targets into regulations. As mandatory carbon dioxide (CO2) regulation increases in strength, it is clear no single fuel will solve all of shipping’s zero carbon needs. In the future, shipowners will equip vessels for the fuel most appropriate to a ship’s type, route and cargo. As well as ammonia, other candidates for alternative fuels include hydrogen, methanol, biofuels, batteries and nuclear power.

Each fuel has benefits and drawbacks, but fuel flexibility, the ability to convert an engine to use a different fuel, will play an important role. Each shipowner will have critical investment decisions to make about its fleet, probably several times over the next few decades, particularly as the life expectancy for the average ship is 25-30 years. Some vessels will be refitted with entire new propulsion systems, others will be scrapped and replaced.

A recent survey of shipping sector stakeholders by Lloyd’s List – the maritime publication – and LR identified ammonia as one of the top three fuels with potential for 2050. The survey showed the industry expect ammonia usage to grow to 7% of fuel by 2030 and 20% by 2050. Ammonia is also central to several national decarbonisation strategies. For example, Japan plans to expand ammonia fuel use to three million tonnes per year by 2030. Here we review the potential of ammonia as a fuel for shipping, looking at how it could reduce or eliminate emissions of CO2, the main GHG associated with fossil fuels.

The case for ammonia

Carbon emissions
Ammonia is a compound of nitrogen and hydrogen. As ammonia contains no carbon it does not emit any CO2 when used to fuel an internal combustion engine. This creates the potential for truly zero carbon propulsion. An additional small quantity of pilot fuel is required for combustion however, which should also be zero carbon. However, what must be considered is that most ammonia today is produced from natural gas and so from a lifecycle perspective it is not zero-carbon, which is something the industry needs to address if ammonia is pursued.

Acceptable energy density
One attraction of current fossil-based fuels is their high volumetric energy density. Most alternative fuels are unable to match this, meaning that they would take up valuable cargo space onboard a ship. Ammonia volumetric energy density is broadly similar to methanol and higher than hydrogen, making onboard storage economically feasible, albeit not as compact as the heavy fuel oil (HFO) used today.

Relatively easy to handle
Ammonia is often compared with hydrogen. Both are stored in liquid form, hydrogen requiring cryogenic tanks maintained at -253°C, while ammonia requires less cooling and can be stored at temperatures of around -33°C. Ammonia is manufactured from hydrogen, so for zero carbon ammonia we need ‘green’ hydrogen manufactured using renewable energy.

Hydrogen transport
Hydrogen can also be used as a fuel for shipping or other purposes; however, the sophisticated cooling equipment and mitigation of hazards make hydrogen expensive to transport. Carrying ammonia has advantages over hydrogen in that it is liquid at ambient conditions, requiring lower storage volumes. The costs of hydrogen transportation may be reduced by manufacturing ammonia from hydrogen at the source, transporting the resulting ammonia and then reforming back to hydrogen at the destination, but more work is needed to calculate this cost reduction.

Economics have long-term potential Ammonia is a global commodity with transparent pricing, so a market already exists. The bulk of current supply is ‘grey’ ammonia, manufactured from hydrogen created from natural gas, which generates significant CO2 emissions. Shipping’s goal is to produce ‘green’ ammonia from renewable energy. While this will be much more costly in the short-term, prices should fall substantially as production is scaled up.

The major challenges are land-based
The focus is often on carbon emissions generated from a ship’s engine and ancillary systems onboard. Yet substantial emissions are also generated in the production and supply of fuel, through extraction of energy sources, fuel manufacture, transport and storage at port. To avoid simply shifting the problem upstream, the shipping industry needs to consider the whole supply chain.

A 2020 study by University Maritime Advisory Services (UMAS) and the Energy Transitions Commission found that USD 1-1.4 trillion is needed to achieve the IMO’s carbon reduction ambition by 2050. The study also highlighted that around 87% of the total investment is needed in land-based infrastructure and production facilities for low carbon fuels. In many cases the upstream challenges are also tougher to overcome, as they involve many more stakeholders, and these huge infrastructure investments could have significant impacts on people and the environment.

A worldwide ammonia distribution system is already in place, but fuel needs to be available in the right locations at the right volumes. The existing ammonia transport network connects production and storage locations that serve the industrial market; it does not reach ports in a way that would allow ships to bunker.

Perception of ammonia by the wider community, outside fleet operators, will need to change for it to become accepted as a fuel. Port authorities and regulators are presently reluctant to permit bunkering of ammonia due to toxicity hazards, while the reaction of citizens to large scale ammonia storage in ports is untested. Whilst current regulations preclude the use of ammonia as a fuel for shipping, classification societies and other groups are working to assess risk and provide guidance that will lead to new rules and standards.

Safety issues must be addressed
While ammonia is not highly flammable, concentrations in air as small as 0.25% can cause fatalities, making the fuel highly toxic to people. Today’s residual and distillate fuel oils (and even natural gas) all present lower risks than ammonia. Fuel systems must be designed, manufactured, operated and maintained to ensure the safety of the ship crews, port staff and fuel suppliers.

Today’s ships are built to standard configurations in which engines and fuel systems are often in confined spaces on lower decks. The different requirements of ammonia could alter ship layouts or could even lead to complete redesigns.

Handling ammonia onboard ships will require a complete new set of skills and safety procedures. There is a need to understand the potential negative impacts on human lives, water and soil in case of leakage or accidents, and how to mitigate these types of risks. A new safety pathway is therefore needed to adopt ammonia. Luckily there is the possibility to leverage current rules around the transport of ammonia.

In addition, the combustion of ammonia in engines releases nitrous oxide (N2O), a greenhouse gas even more potent than CO2. Thereby, additional equipment will be required onboard to control NOx emissions.

Solution readiness
The shipping industry has carried ammonia as bulk cargo for 100 years and the cargo risks are understood and managed. The fuel was also one of the earliest refrigerants used onboard and remains a popular choice for fishing vessels due to its wide availability, simple manufacturing process and relatively low cost.

However, shipping has no experience of ammonia as a fuel and given the safety challenges, a rigorous process for risk assessment of fuel handling and propulsion systems will be required. Robust safety standards must also be mandated across the entire supply chain.

To enable organisations to make informed choices on the zero-carbon journey, LR has created the Marine Solution Readiness Level (MSRL) framework. This is a standardised screening assessment that ensures consistency of evaluation across widely different fuels and technologies, enabling evidence-based decision making.

Current readiness levels
Research by LR and UMAS, ‘Techno-economic assessment of zero-carbon fuels’ (2020) gives an early indication of the investment readiness of ammonia as a shipping fuel in comparison with other alternative fuels, including hydrogen, methanol, biofuels, and batteries, and fossil fuels such as natural gas and HFO. Fuel is the major component of operating costs and the primary driver of vessel competitiveness. The research used a typical bulk carrier as a case study under a range of scenarios for energy price and total operating cost. A key finding was that ammonia produced from natural gas combined with carbon capture and storage (blue ammonia) is the lowest cost zero-carbon option when considering timeframes to 2050.

The research also reviewed technology readiness, identifying that some aspects of the ammonia delivery chain, including bunkering equipment, tanks and fuel supply systems, are progressing towards detailed design solutions. Other areas, such as procedures and quality standards, ancillary equipment onboard and boilers, were still at concept stage. Since then, we’ve seen developments in propulsion progressing rapidly and engine manufacturers are now announcing prototypes and pilot projects.

The LR and UMAS research also provided high-level indications of community readiness in relation to lifecycle emissions and the evolution of the broader energy landscape, showing that green ammonia is one of the best net CO2 performers across the whole lifecycle. For ammonia to transition from industrial commodity to shipping fuel, the right conditions need to be in place across all community dimensions for example, sufficient cross-sector demand, efficient production processes and strong international policy and regulations.

Overcoming the hurdles
Success requires contribution from many different types of organisations across the shipping sector, collaborating to mitigate the remaining risks and uncertainties. LR is steering developments through its Maritime Decarbonisation Hub, a joint venture between the LR Foundation and LR. By identifying the key challenges and then creating partnerships to overcome them, we are advancing solution readiness across the spectrum of future fuels and technologies. Several ammonia-fuelled vessel designs have been approved in principle, including an ultra-large container ship concept in both China and Korea as well as a deep-sea tanker design due for commercialisation by 2024.

Overall, ammonia looks to be a promising alternative fuel with potential to make a major contribution to the decarbonisation of shipping. Now sector stakeholders must work together to develop and prove the feasibility of practical solutions.

Above article has been initially published on Lloyd’s Register website and is reproduced here with author’s kind permission.