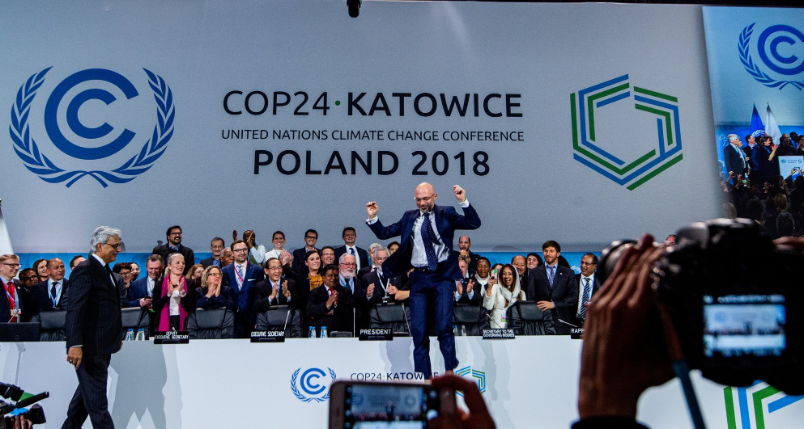 Michał Kurtyka, COP24 President, jumping out after the Katowice Climate Package was adopted

COP 24: Mixed feelings for the future of planet

The 24th UN Climate Change Conference (COP 24) was held in Katowice, Poland, from 3 to 15 December, gathering parties from all around the world to push further work on the fight against climate change, exactly three years after the Paris Agreement. Although the initial feeling was that the negotiations would not end up in some tangible results for the future of the planet, governments eventually adopted a robust set of guidelines for implementing the landmark 2015 Paris Agreement, literally on the edge of time, as the negotiations went overtime.

The conference gathered all interested parties to agree on how they will achieve the goals set in Paris under the so-called ‘Paris Agreement on climate change’ in 2015, which reflects the goal of 197 states to keep global temperature rises to well under 2°C above pre-industrial levels, and as close as possible to 1.5°C.

The Intergovernmental Panel on Climate Change (IPCC) has earlier warned that global greenhouse gas emissions must be slashed to net zero by 2050 or the goals set by Paris agreement cannot be reached.

However, four nations during the talks, including United States, Saudi Arabia, Russia and Kuwait, refused to welcome and align their roadmap with the IPCC findings, while the host Poland has been criticized from green campaigners for seeking permission to continue using coal for years despite data indicating that the opposite must happen.

As such, on Friday, when the event was to run out of time, two weeks of negotiations seemed to have brought less than the expected outcome, driven by uncertainty, lack of trust between the parties, as well as the US position to withdraw from the Paris accord – although this cannot be feasible earlier than 2020. Notably, at the last day of the event, the conference center in Poland was filled twice with protesters demanding swifter action from world leaders.

However, on Saturday, 15 December, and following several sleepless nights, the almost 200 states set a landmark by finally adopting the ‘Katowice Climate Package’, designed to operationalize the climate change regime contained in the Paris Agreement.

….said UN Secretary General on the conclusion of the COP 24.

Let’s take a deeper look on the outcome of COP 24!

The ‘Katowice Climate Package’, also called the ‘rulebook’, aims to promote international cooperation and encourage greater ambition and benefit people from all walks of life, especially the most vulnerable. The agreed guidelines mean that countries can now establish the national systems that are needed for implementing the Paris Agreement as of 2020.

The Katowice package namely sets out how countries will provide information about their Nationally Determined Contributions (NDCs) that describe their domestic climate actions. This information includes mitigation and adaptation measures as well as details of financial support for climate action in developing countries.

The package also includes guidelines that relate to:

All nations have worked tirelessly. All nations showed their commitment. All nations can leave Katowice with a sense of pride, knowing that their efforts have paid off. The guidelines contained in the Katowice Climate Package provide the basis for implementing the agreement as of 2020,

…said the President of COP24, Mr. Michal Kurtyka of Poland.

Key issues still to be resolved concern the use of cooperative approaches, as well as the sustainable development mechanism, as contained in the Paris Agreement’s article 6, which will be finalised next year at COP25.

States have sent significant positive signals towards Green Climate Fund’s first formal replenishment, with Germany and Norway announcing that they would double their contributions. The Adaptation Fund received a total of USD 129 million.

Meanwhile, the First Minister of Scotland, Nicola Sturgeon, announced a £200,000 funding for the Marrakech Partnership for Global Climate Action, to encourage wider collaboration across government, business, and society to boost action against climate change.

Moreover, in line with their clean energy financing roadmap, five leading banks, including ING, BBVA, Société Générale, Standard Chartered and BNP Paribas, committed to explore ways to steer financial streams towards the goals of the Paris Agreement. The shift marks an ambition to support sector-specific shifts in technology and production processes by developing open-source methods for measuring how well lending portfolios align with the Paris Agreement targets.

The engagement of multilateral development banks (MDBs), international organisations, businesses, investors and civil society at COP24 helped to build the political will towards the outcome in Katowice. 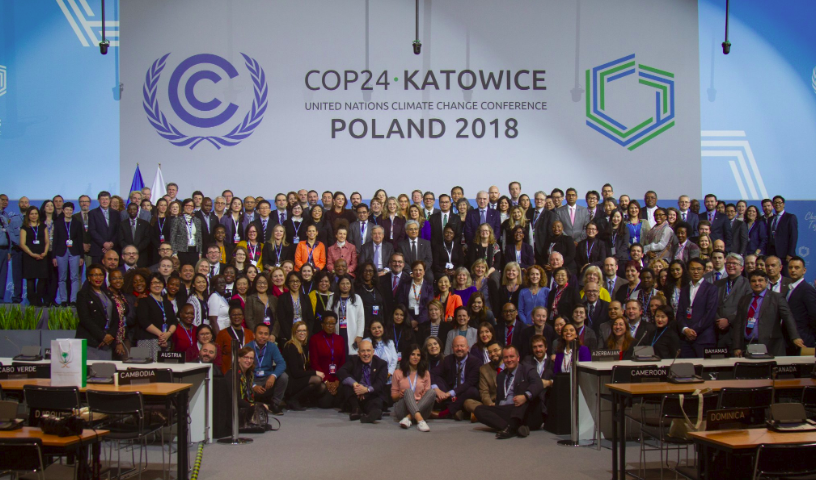 Additionally, at the Global Climate Action High-level events, 15 international organizations jointly announced a commitment to make their operations climate neutral. Representing over 2 million tons of CO2 per year in emissions, and more than 50,000 staff, the organizations will measure their GHG emissions, reduce them as much as possible and compensate the currently unavoidable ones with credible carbon credits.

IMO, as the UN representative body for shipping, attended COP 24, focusing on key elements of the Initial IMO Strategy on reduction of GHG emissions from ships. The adoption has been a historic milestone in the Organization's continuous contribution to global efforts to limit and reduce GHG emissions.

To remind, the Initial Strategy envisages for the first time a reduction in total GHG emissions from international shipping which, it says, should peak as soon as possible and to reduce the total annual GHG emissions by at least 50% by 2050 compared to 2008, while, at the same time, pursuing efforts towards phasing them out as called for in the Vision as a point on a pathway of CO2 emissions reduction consistent with the Paris Agreement goals.

IMO's main objectives for the COP 24 were:

On the sidelines of the event, Danish Maersk announced its plans to become carbon neutral by 2050, eyeing carbon neutral vessels commercially viable by 2030, acceleration in new innovations and adaption of new technology.

The final high-level session in Katowice resulted in the Talanoa Call for Action, which calls upon all countries and stakeholders to act with urgency. The call for action is a result from the Fiji-led Talanoa Dialogue, a year-long inclusive dialogue around ambition relating to the Paris Agreement. The dialogue concluded at COP24, with the Global warming of 1.5C report by the IPCC as a major input.

Together with the UN, Sir David Attenborough launched a climate action campaign inviting people around the world to share their thoughts on climate change. Thousands of influencers from around the world have joined him by inviting their social media followers to use the hashtag #TakeYourSeat to gather people’s experiences and opinions.

In launching The People’s Seat, the UN is working to engage all citizens to add their voices to address the defining issue of our time - climate change. People from around the world had a unique opportunity to make their voices heard and views included in the People’s Address, which was delivered by Sir David Attenborough at COP24 and were being broadcast on social media around the world.

Several reports were released on the occasion of the COP 24 Conference.

The next United Nations Climate Change Conference will take place in Chile and consultations will provide clarity on the city and exact date of the conference in due course.