Transport Malta issued an accident report focusing on a vessel which faced many challenges navigating through rough weather conditions; Although all works were suspended in sight of the heavy weather, equipment in the engine room broke and fatally injured two crewmembers.

On 08 October 2018, Maersk Jaipur was sailing through heavy weather conditions, heading to Dutch Harbor, Alaska. The vessel was rolling in the seaway.

At abour 0900, the crew conducted a heavy weather checklist and resulted to suspension of all works, amid the safety of the crew. After sailing through the Unimak Strait, with Southeasterly winds gusting to Beaufort Force 9, the engineer on duty informed the master and the chief engineer about loose equipment in the engine-room.

The majority of the crewmembers went to the engine room to check the situation, when they saw two spare auxiliary blowers that had broken free from their lashings and were moving freely on deck. In light of the situation, the fitter and the oiler were trying to secure the spare blowers in place, when both of them fell down.

The oiler was pulled away by the second engineer just in time; however, no one could reach the fitter, and the blower crushed him against the bulkhead, resulting in fatal injuries.

Following the fatal incident, Transport Malta states that the immediate cause of the accident was the failure of the lashing securing the spare equipment.

Also, additional causes that were found are:

The Company followed a number of safety actions with the aim of preventing similar future accidents. In essence: 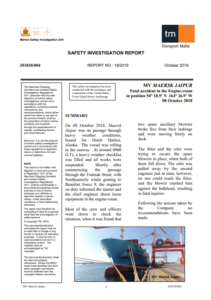