A newly-published study presented the idea of ‘artificial snow’ could prevent further ice melting and could stop the West Antarctic Ice Sheet from sliding into the ocean. The scientists launched an engineering project to blanket the ice sheet’s surface.

The associated sea level rise of more than 3m would pose a serious challenge to highly populated areas including metropolises such as Calcutta, Shanghai, New York City, and Tokyo.

Specifically, the authors participating in the study aspire to see the use of 12,000 wind turbines to pump seawater 1,500 metres up to the surface, where it would be frozen into ‘snow’ to try to weigh the sheet down enough to stop it collapsing any further.

In the meantime, climate change has already impacted the environment, keeping in mind the excessive damages occurring from droughts, floods, storms and wildfires. Also, global warming has damaged the south pole, resulting to the giant ice sheet beginning to disintegrate, which would lead to an eventual global sea level rise of at least three metres (10 feet) over centuries.

We have already awoken the giant at the southern pole. We are already at a point of no return if we don’t do anything. We can bring it back to the stable point by a small interference now – or by larger and larger interference later.

Moreover, the Professor added that although the projected sea level rise from the West Antarctic Ice Sheet might not unfold for hundreds of years, he published the paper to alert the low-lying populations.

Following, melting ice in Greenland, Arctic and shrinking glaciers would worsen the problem and sea level would rise to at least five metres, even if the countries were ever able to implement the Paris Agreement plan.

Moreover, the authors of the study concluded that the West Antarctic Ice Sheet could be in a stable position by depositing a minimum of 7,400 gigatonnes of artificial snow over 10 years around the Pine Island and Thwaites glaciers.

As the paper highlights

We find that the precise conditions of such an operation are crucial, and potential benefits need to be weighed against environmental hazards, future risks, and enormous technical challenges.

Concluding, the paper didn’t provide any details concerning the cost of such intervention, as Levermann suggested could be borne by governments. 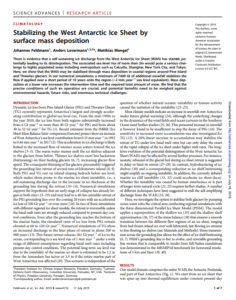