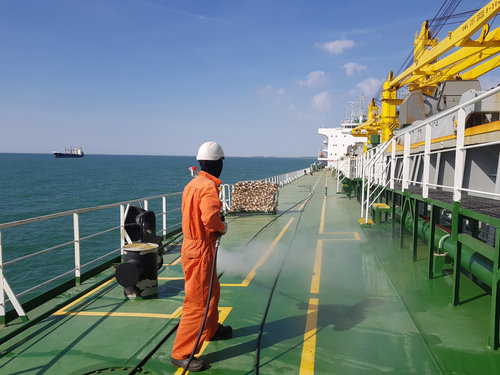 Seafarers’ happiness levels increased at 6.46 in the first quarter of 2021 from 6.37/10 in Q4 2020, according to the latest Seafarers Happiness Index report by The Mission to Seafarers, which unveiled a mixed picture in terms of welfare standards and conditions for seafarers.

This first report of 2021 focused on the impact of COVID-19 on the lives of seafarers, revealing the positive impact of improved connectivity and port welfare services, but also a growing concern over crew changes, access to COVID vaccines, and onboard working conditions.

While it was good to see a rise in the overall results, satisfaction levels have generally fallen since the onset of the pandemic and it would therefore be too early to view this as a recovery,

The report specifically highlights three main themes: the consequences of a lack of recognition for seafarers as key workers, the onboard challenges of working hours and crew tension, and the benefits of onboard connectivity and port welfare services.

Progress is slowly being made, but we cannot afford to let momentum stall. We hope to see seafarers recognised as international key workers, with the support that entails on everything from crew changes to vaccine access,

…said Andrew Wright, Secretary-General of The Mission to Seafarers.

-Lack of progress on crew changes and vaccine access

The first quarter’s responses revealed lingering worries about the ongoing crew change situation, which has left crews stuck onboard for extended periods. Looking at some of the concerns raised, a central theme in the responses was that seafarers feel that they should, and indeed they must, be recognized and designated as key workers.

A major and repeated issue was also whether vaccines will be provided for seafarers and how this will be done. Many respondents wondered about the mechanism for receiving vaccines, particularly if a second dose would be needed. There are questions being asked, and few answers being given.

This is likely to be a long-running concern until plans are made clear. As more of the global population receives vaccinations, with shore-based key workers prioritized in many countries, there is significant concern about the lack of progress with plans to vaccinate seafarers. Uncertainty and frustration continue to grow,

…The Mission to Seafarers noted.

Seafarers consistently spoke of the pressures to work excessive hours. Furthermore, respondents raised issues of fraudulent record-keeping, seeing seafarers working 14 to 15 hours every day but being forced to sign a monthly working slip that complies with working hours.

In addition, the workload and the tasks being asked of crew also take a heavy toll, particularly in relation to pressures to reduce manning and rest periods not taken.

Tensions between mixed nationality crews further highlighted criticisms of manning models, particularly with regards to the impact of COVID-19. It was reported that some nationalities are not allowed ashore or allowed crew changes, while others are, which further impacts crew wellbeing.

In addition, there were repeated reports of xenophobia onboard, and how the delicate social balances are at risk through the attitudes and actions of some seafarers and even shore management. There is a sense of a growing divide and a feeling of resentment. Pressures on board are rising, and there were many more seafarers than previously talking of bullying, harassment and frictions on their ships.

If COVID-19 has brought any single seafaring issue to the fore, it has been that of connectivity. Encouragingly, it seems that some progress is being made, with more seafarers being able to get online and connect with friends, family and loved ones back home.

More shipping companies are working to provide crews with access to Wi-Fi, making a big difference in alleviating the hardships being faced by seafarers and improving morale onboard.

It is heartening to see the small improvement to seafarer’s lives on board as mentioned in this recent report, but more can and should be done to take care of our seafarers who are ensuring that our shelves remain fully stocked,

Crew repeatedly and consistently spoke of pressures to sign against working hours which do not reflect what they had actually worked. Indeed, there was criticism of shore managers as they are deemed to be “primarily concerned regarding paper trail for audit versus actual conditions of the work required”. It seems there is a massive hidden problem. While many companies manage working hours properly, effectively and well, there are others not applying the rules, and flouting conventions, and laws. These are damaging the system meant to keep our seafarers safe and our seas clean.

There are definite indications of frayed nerves, which in turn are jeopardising usually positive relationships. Seafarers spoke of running out of patience with colleagues, or of feeling frustrated by perceived issues surrounding the conduct of others.

Oppression, bullying and intimidation were mentioned and are a real cause for concern. Resentment towards those of different nationalities was also raised, with seafarers feeling they were treated badly on board because of where they are from.

There were also criticisms of mixed nationality manning models, and this was particularly with regards to the impact of COVID-19. It was stated that some nationalities are not allowed ashore or allowed crew changes, while others are.

The responses on shore leave have repeatedly fallen away over the past year, and each report reveals negative reactions. Like some tantalising glimpse of a past world, it seems there is a lingering memory of what it once was to get time off the ship, to go and explore, to see new sights and to buy things that no one else back home had. Sadly, it seems that shore leave is becoming something of an anachronism.

The desire to get ashore appears to have dropped over the past few years of SHI reports. Many crew say the costs, hassles and knock-on effects of time off the ship are not worth it. “There are simply not enough people to get the work done, and we cannot cope if people are off ashore,” was the honest reflection of one senior officer. It had become the norm for seafarers to simply try to get through their trips and look forward to getting home rather than the benefits of shore calls. This has been drastically exacerbated by COVID-19. 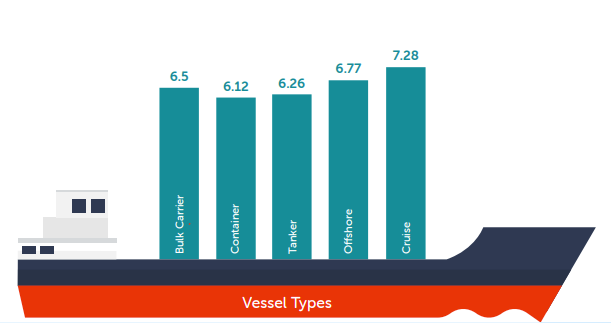 Of those with the highest response rates, bulk carriers moderately took the lead, but the responses from offshore and cruise vessels contained doubly good news. Not only was the number of respondents up, but so too the happiness levels recorded. 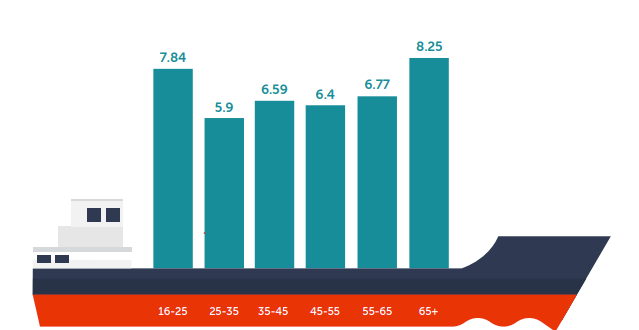 The youngest and oldest groups returned the highest happiness levels, while the figures waxed and waned across those in the middle of the working age population. 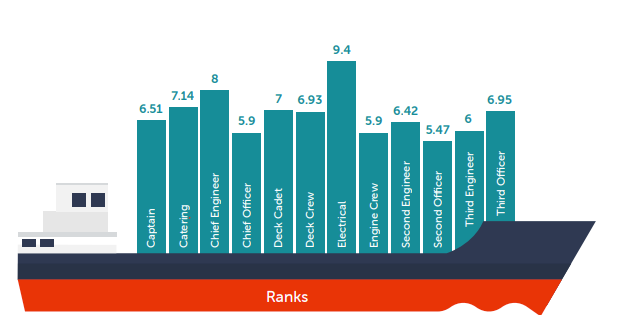 The data trends across ranks were similar to those at the end of 2020, save for the electrical department – though they only represented a small number of respondents. Looking at the other ranks, the Chief Engineers appear to have been the best performing and far happier than their deck department colleagues. 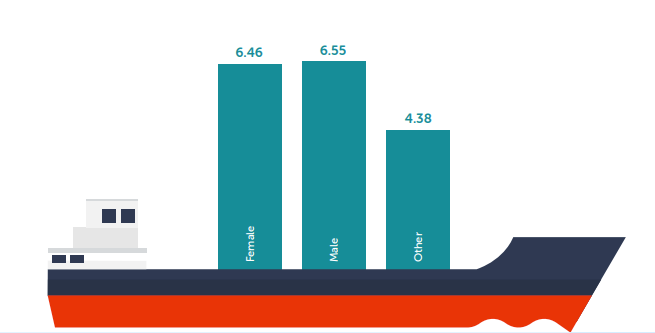 There was a drop in female seafarer happiness this time around, falling sightly below male colleagues. Looking at the data, there was a very diverse split. There were those who recorded high levels, and they spoke of the great team atmosphere onboard. Conversely, those who recorded very low figures spoke of intimidation and feeling uncomfortable in their interactions onboard. 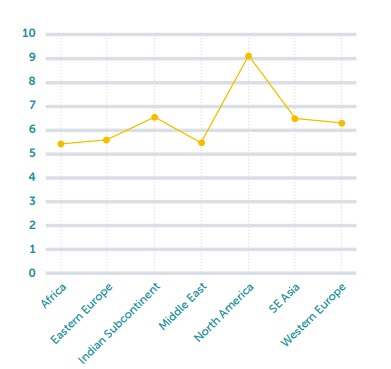 The happiest seafarers by far were from North America, recording the highest score we have seen, of over 9.14. As seen in previous reports with similar positive outliers, it must be stressed that there was only a relatively small number of responses from this region, and once more it seemed that the short sea nature of their trades saw them less affected by crew change concerns. Elsewhere the largest groups, of Indian Subcontinent and South-East Asian crews, scored average happiness levels of 6.67 and 6.45 respectively.