Ro-ro ferry hits jetty, grounded due to loss of control

The UK MAIB issued an investigation report on the UK-registered ro-ro passenger ferry, Pride of Kent, that struck a jetty and then grounded while departing Calais, France, on December 2017 amid loss of control. The ferry was re-floated later that day and moved to a berth where the passengers disembarked. The ferry’s starboard propeller and tail-shaft were damaged and required repair in dry dock. The jetty was also damaged. No injuries and pollution were reported.

On December 10, 2017, the ro-ro Pride of Kent was approaching Calais. On the bridge was the master, an officer of the watch, an assisting officer, and a helmsman. As the vessel passed the breakwaters, the Master noticed that the wind speed had rose and ordered the bridge team  to inform him if there were any exceptional gusts.

As the wind was increasing, the vessel’s bow came close to the linkspan landing pads and the master assessed that he would be unable to keep the stern alongside the berth.

After that, Pride of Kent’s master immediately advised the bridge team that he was aborting the berthing and that tug assistance was required. Although the ferry was close to berth 6, no.1 bow thruster stopped.

As the ro-ro vessel was close to the jetty, the ferry’s starboard side struck the jetty piles. The ferry moved ahead with the propellers still turning and the rudders full to port.

About 20 seconds later, the starboard propeller shaft stopped on overload and the ferry then grounded in the shallow water to the west of the jetty.

According to the UK MAIB, the following played an important role in the incident:

Other factors that also had a bearing on decision-making, the bridge team’s performance, and machinery reliability included:

Based on the actions that have already been taken, no recommendations have been made. 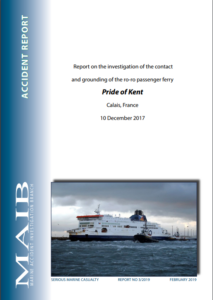