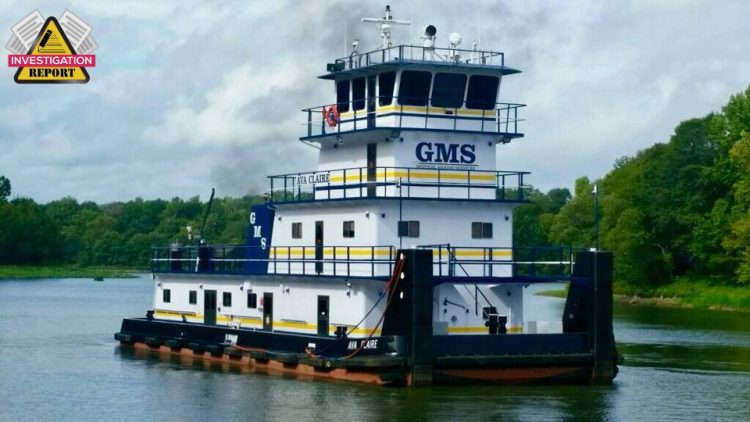 NTSB published its report on the March 22, 2021 incident, when the bow of the lead barge of the towing vessel Ava Claire struck a closed lock gate, damaging and disabling the gate.

At 1500 on March 20, 2021, the Ava Claire tow departed the Valero St. Charles Refinery, located at mile 125 on the Lower Mississippi River in Norco, Louisiana, bound for the Valero Port Arthur Refinery in Port Arthur, Texas. Over the next day and a half, the vessel and tow transited down river, locked through to the Gulf Intracoastal Waterway at Algiers, Louisiana, and headed westbound. The Gulf Intracoastal Waterway provided a protected navigation route between Florida and Texas. The captain reported no problems with the steering or propulsion systems during the transit through the Algiers Lock.

About 0030 on March 22, the captain went to sleep after being relieved of the navigation watch by the pilot. About 4.5 hours later, between 0500 and 0515, the captain awoke and proceeded to the wheelhouse to assume the watch early. Although the captain’s daily watch rotation was 0600–1200 and 1800–2400, he stated that he normally took the morning watch soon after awakening.

When the captain entered the wheelhouse, the tow was approaching the Leland Bowman Lock, near Intracoastal City. According to a policy contained in the GMS vessel operations manual and dated October 2016, a change of watch was not to occur during “a critical move.” Whether a move was critical was to be determined by oncoming and offgoing watchstanders; examples in the manual included operations involving “bridges, locks, and docking operations.” According to a company representative, a copy of the operations manual was kept on board the vessel, and crewmembers were introduced to the manual and its procedures during company orientations and quarterly safety audits.

The Ava Claire pilot offered to take the tow through the Leland Bowman Lock before turning over the watch, but the captain declined the offer and took the helm about 5 minutes before maneuvering the tow into the lock. Before turning over the watch, the pilot informed the captain that he was having trouble communicating via handheld radio with the Ava Claire deckhand, who was stationed on the lead barge in preparation of the lock entry.

At 0516, when the Ava Claire was 0.2 miles from the lock, the speed of the tow was 5.2 mph. The captain stated that when the tow neared the long wall on the north side of the lock, he reduced the speed on the engines, keeping them “in clutch” ahead to provide steering control. The tow’s speed began to slow as the bow of the lead barge, HFL 439, passed between the open gates on the eastern side of the lock.

The western gates to the Leland Bowman Lock were closed as the tow proceeded into the lock. According to the captain, the lock master typically instructed towing vessel operators by radio to “bring it all the way to the gate,” which meant stopping and tying off the tow with the bow of the lead barge about 50 feet from the closed gates. The captain intended to take this approach as he maneuvered the Ava Claire tow in the chamber. The captain said that during a lock transit, deckhands would call out the distances to the closed gates as the tow moved forward; however, on the morning of the casualty, he was not receiving reports because of ongoing trouble with their handheld radios. In a statement to the Coast Guard, the deckhand confirmed that he and the captain were having “a little issue” with handheld radio communications and that the captain could not hear his distance calls.

The captain told investigators that as he was maneuvering the tow in the lock, the GPS feed to his electronic chart system (ECS) failed, denying him his primary source of speed indication (a postcasualty replay of the ECS data confirmed the loss of the GPS signal). Thus, he had to judge the speed of the tow by watching the illuminated lock wall out his side windows and the lock gates out his forward windows.

According to the captain, when the head of the tow was about 600 feet from the western gates, he moved the engine throttles to slow astern. Based on automatic identification system (AIS) data, the tow’s speed at the time was 3.7 mph and decreasing.

The deckhand stated that radio communications improved when the head of the tow was about 250 feet from the western gates. At this time, the captain was able to hear the deckhand’s distance calls. AIS data shows that the vessel’s speed was 3 mph. The captain said that when the tow was about 200 feet from the gates, he put the engines at full astern. The tow continued to slow but did not fully stop before the starboard bow of the HFL 439 struck gate no. 3 on the northwest side of the lock at 0522. The tow’s speed when it contacted the gate was 1.2 mph.

#1 Captain’s Experience: The captain at the helm of the Ava Claire had at least 10 years’ experience maneuvering tows in the waterway system, including the Leland Bowman Lock. However, at the time of the casualty, he had not piloted a tow through the waterway or the lock with the 2,000-hp Ava Claire. In the previous 6.5 years, he had captained 2,600-hp towing vessels that he said had more stopping power. When he joined the Ava Claire about a month and half before the casualty, he operated the Ava Claire for a brief time as a pilot to gain familiarity with the towing vessel before taking over as captain. Yet, during this period, the vessel only operated in rivers that had deeper water.

#2 Navigation Challenges: A tidal current may have been pushing the tow from astern, adding speed as the tow approached the lock. Moreover, problems with radio communications between the deckhand and the captain further impacted the captain’s ability to judge speed and distance in the 1,140-foot-long lock chamber.

#3 Sleep Inertia: The casualty occurred at 0522, less than half an hour after the captain had awakened that morning. He had slept for about 4.5 hours following his previous watch. Upon taking the helm watch, he almost immediately began maneuvering the tow into the lock. At the time, the captain was likely experiencing the effects of sleep inertia – the temporary feeling of grogginess felt immediately upon waking up.

#1 Probable Cause: The National Transportation Safety Board determines that the probable cause of the contact of the Ava Claire tow with the Leland Bowman Lock gate was the towing vessel captain’s decision to assume the helm watch and attempt a predawn transit into the lock immediately after awakening while he was likely impaired by sleep inertia.

#2 Lesson Learned – Conducting High-Risk Operations Immediately after Awakening: Sleep inertia is the temporary feeling of grogginess felt immediately upon awakening. Studies have shown that the effects of sleep inertia include reduced alertness, slower reaction time, less accuracy, degraded memory, and impaired decision-making ability. Sleep inertia generally lasts for about 30 minutes after waking but may last longer if a person is sleep deprived. Mariners should allow time to fully recover from sleep inertia before taking a watch and performing critical duties.