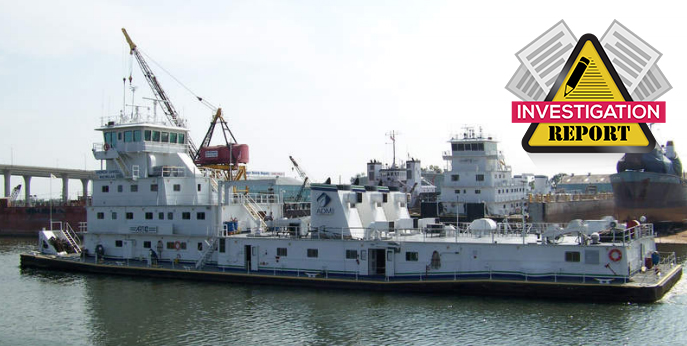 The NTSB issued an investigation report on the contact of the Andrew Cargill MacMillan towing vessel with a conveyor at the Farmers Grain Terminal, while pushing 42 loaded barges on the Lower Mississippi River, near Tallulah, Louisiana. The key cause identified was the pilot’s over-reliance on floating aids to navigation.

Although the vessel was equipped with radar (the pilot said he had one of its range rings set to a half mile and the other set to one mile) and an electronic charting system (ECS), the pilot was navigating solely using visual references in the river.

About 1406, with a following current, the vessel and tow were at mile 445 approaching the bend at Yazoo Cutoff. At a speed of about 9.5 mph over ground, the pilot began to steer the bend, a turn to port.

While rounding a bend, the tow touched bottom, resulting in the head of the tow contacting breasting dolphins and a conveyor at the Farmers Grain Terminal at mile 442.4.

The conveyor was destroyed, and the dolphins and a lead barge were damaged. There were no injuries to the ten crew onboard or anyone ashore, nor pollution.

Damage was estimated at $8 million for the conveyor and dolphins and about $74,000 for the barge.

The National Transportation Safety Board determines that the probable cause of the contact of the tow of the Andrew Cargill MacMillan with the Farmers Grain Terminal breasting dolphins and conveyor was the pilot’s overreliance on floating aids to navigation, which resulted in the tow being out of position and sliding too deep into the bend before the terminal to recover and successfully complete the turn.

The pilot, who was steering the head of the tow to the buoy closest to him, momentarily lost sight of the red buoy and mistakenly steered on an object drifting in the vicinity of where he last saw the buoy.

By the time the buoy had re-appeared and the pilot realized he was steering on the drifting object, the tow was in the center of the river and sliding towards the right descending bank.

He tried to steer to the left bank using hard rudder, which was 45o, but the vessel slid deeper into the bend, where the stern of the aftermost starboard barge struck the bottom, thus deflecting the head of the tow to starboard and towards the breasting dolphins and conveyor.

The pilot relied on visual means to navigate the vessel and tow in a sharp bend by using buoys.

Although steering vessels by visual reference is a primary means to navigate in western rivers, there was equipment (ECS, radar, swing meter) on the vessel that could have aided in crosschecking the vessel’s position and rate of turn in the bend.

Had they been effectively used, he may have been able to detect that he was out of position earlier, thus allowing him to make corrections to keep the tow from further sliding into the bend.

In an attempt to bring the tow back into position, the pilot used hard rudder, steering as he would have done on the Viking Queen, in order get the tow back up into the bend.

However, on a vessel fitted with high-lift rudders, the most effective lift would have been to a maximum of about 35o of rudder angle. 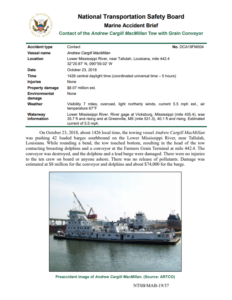