Lifting, slips, and falls incidents the most frequent at sea, report reveals

ABS, the American Club, and Lamar University (Lamar) are calling on industry to promote the cause of safety at sea with more comprehensive reporting requirements for injury and near miss reporting. This call comes after an industry-wide project analyzing more than 12,000 injury records.

These injuries have a financial cost of $246m, while the parties examined an additional 100,000 near miss reports from the ABS and Lamar Mariner Safety Research Initiative (MSRI) and almost a decade of data from the American Club.

The research reveals that injuries sustained while lifting or in slips, trips/falls are the most frequent incidents at sea, with more than 1,300 incidents in this study’s dataset. According to the American Club data, these incidents cost more than $85m for the six-year period studied.

Looking at costs and anatomical locations, the two most costly body locations were the head and neck, averaging just over $100,000 per incident followed by the back and torso at $66,000.

Shipping is currently navigating through a digital era in which asset owners are increasingly able to use the power of operational data to predict potential failures. As those capabilities grow, the industry would be well counselled to also get ‘smarter’ about how it compiles and uses its safety data

In addition, falls were more common than slips and trips in both data sets, due to slip events not resulting in reportable injuries. This is commonly called a near miss or close call. Based on the ABS/Lamar data set, common locations for falls that caused injury are deck (43%), engine room (13%), and stairs (7%). Common locations for slips that caused injury were deck (44%), stairs and ladders (13%) and engine room (11%).

From the ABS/Lamar MSRI data set, injuries involving slips, trips, and falls accounted for 11% of the records, while near misses accounted for more than 24% of records. However, situational awareness, spills, poor housekeeping, and inappropriate lighting, also contributed to injury records. Other key contributing factors related to the near misses include situational awareness, housekeeping, asset design, seafarer fatigue, lack of following procedures, and lack of anti-skid material on decks.

At the time of the lifting injury, various activities in the ABS/Lamar data set were being performed including material handling (34%), maintenance (18%), deck activities (16%), and housekeeping (5%).

In the study, lifting was the area of greatest divergence between the number of near misses and actual injury events. Almost as many near misses in the ABS/Lamar data set were reported for smoking (0.5%) as all lifting-related near miss events (0.7%). 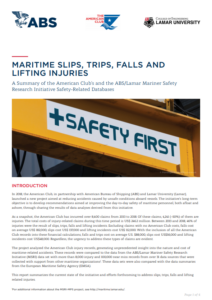