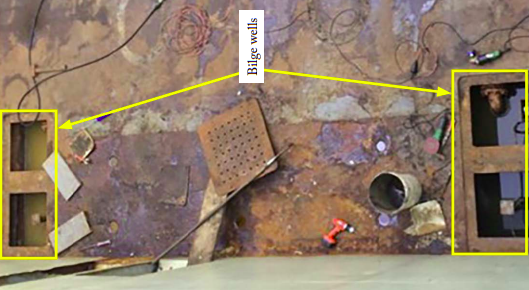 In its latest Safety Digest, UK MAIB describes how a crew member onboard a bulk carrier felt unwell and had to be evacuated after using chemicals inside an enclosed space that was not properly ventilated.

Having fully discharged its previous cargo, a small coastal bulk carrier vessel was transiting the English Channel to a port in northern Europe, where its next cargo was waiting to be loaded.

During the sea passage, the AB and the motorman were tasked by the master to clean out the forward hold bilge wells to prepare them for painting. The two crew members spent the morning chipping, scraping and grinding in the bilge wells. They cleaned up the area once finished, and then the AB poured an oxalic acid solution into the wells to prepare the area for painting before they both went up for lunch.

Shortly after returning to the accommodation, the AB started to feel unwell; he was dizzy and was struggling to breathe. The cook and the captain went to his aid. They gave him medical oxygen and then a “Pan Pan” urgency call was made by VHF radio.

A nearby naval vessel responded to the urgency call and sent medical staff over to the bulk carrier by fast rescue boat. The AB’s condition was assessed and the captain was advised to request helicopter evacuation for the injured crewman. The naval medical team helped to keep the AB stable until the helicopter arrived. The crewman was airlifted to a nearby hospital, and after receiving medical attention made a full recovery.

If using chemicals or paint that will change the environment while working, consider the use of continually forced ventilation.