The third report in the Caught Red-Handed paper series analyzes expert opinions about threats to maritime security in the Western Indian Ocean. The survey includes the responses of 110 maritime security professionals. 80% of experts agreed that illegal fishing was a significant security threat to their countries and impacted the economy sector, as well as the local way of leaving.

Many are those who believe that there is a relationship between illegal, unreported, and unregulated (IUU) fishing and other forms of conflict in their country. Indian Ocean countries face several ongoing maritime security threats, including piracy, armed robbery, human smuggling, drug smuggling, and illegal fishing. Each maritime threat has a significant impact on coastal welfare and economic growth.

Respondents considered drug trafficking to be the second most significant maritime security threat.

While terrorism ranked the lowest across the survey of maritime security threats, most respondents rated it as significant in Somalia, Kenya, and Mozambique, where threats from terrorist groups like Al Shabaab are prevalent. 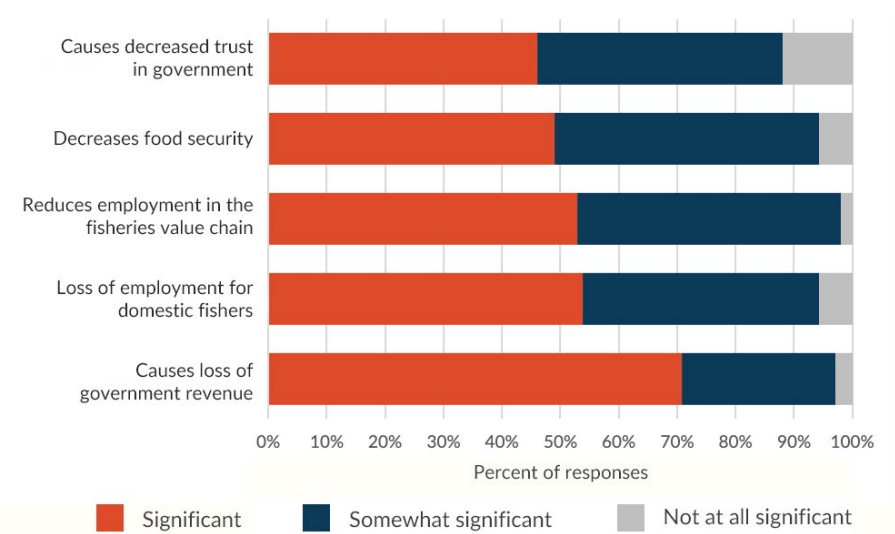 In addition, IUU fishing undermines human security by adversely affecting the economy and food security. Participants were asked to rank, for their home countries, the impacts of IUU fishing as “significant,” “somewhat significant,” or “not significant.” In most Indian Ocean countries, illegally caught fish is not landed, let alone processed, in the country in whose waters it was caught; therefore, the most direct and immediate revenue comes from the licensing of fishing vessels.

IUU fishing is related to conflict at a larger scale.

Illegal fishing is also related to other forms of maritime and land-based conflict. More than half of the respondents noted the relationships between IUU fishing and fisheries conflict—especially conflict between foreign and local fishers, conflict over fish shortages, and conflict around overlapping fishing grounds. The relationship between IUU fishing and conflict is complex, and more research is needed to understand the level and intensity of fisheries conflict in the Indian Ocean. 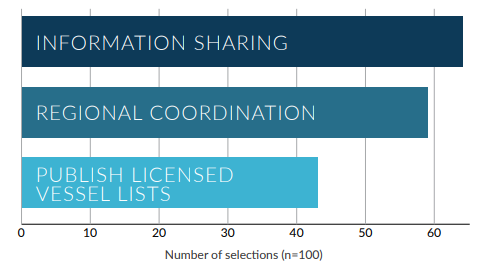 Also, the report notes that every island nation that took part in the survey, Seychelles, Comoros, Mauritius, and Madagascar, picked information sharing more than any of the other options. The lack of information sharing on fishing vessel activities and close coordination between national maritime agencies makes it is easy for transnational fishing vessels to operate unnoticed, far offshore, and to transship illegal catch to distant ports.

None of the Caught Red-Handed participants felt that they had adequate resources to combat illegal fishing. Improved technology was ranked second, as many participants believe that automatic identification systems (AIS), vessel monitoring systems (VMS), and satellite imagery should be used to aid maritime patrols.

The survey came to the conclusions below: 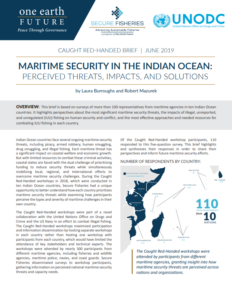