The Panama Canal Authority (ACP) is carrying out a public consultation regarding a proposal to adjust the Panama Canal tolls for container ships, vehicle carriers, dry bulk carriers, tankers, chemical carriers, LPG and LNG vessels, passenger vessels and small vessels. The new toll charges are expected to apply from January 1, 2020.

Timing between proposal and implementation date

Because of the six-month notice, shipping companies might still have to bear any additional costs arising from new toll charges, until the expiry of existing contracts with their respective clients.

A twelve-month notice period would provide shipping companies and operators with sufficient time and room to manoeuvre in terms of negotiating any future contractual agreements, which are likely to be affected by changes to future toll charges.

The suggested timing for implementation of the new toll charges is also important for the global shipping industry, noting that they are expected to enter into force on the same day as the IMO 2020 'Global Sulphur Cap' regulation.

The new regulation is expected to bring uncertainty, which combined with the implementation of the new toll charges on the same day will have a negative impact not only on shipowners and operators, but also on world trade.

For these reasons, ICS, ASA and ECSA request that the ACP at the very least postpone the timing for implementation of the proposed new toll increases by at least six months (June 2020).

Economic sustainability of the Panama Canal

While appreciating that charges for container ships and general cargo ships will not change, ICS, ASA and ECSA are worried about some of the recommended toll increases for other sectors like dry bulk (iron ore), tankers, chemical tankers, LPG & LNG carriers, PCC & ROROs and cruise ships.

The proposed new tolls for the above mentioned segments would be increased by 5-15%, which could impact future trade growth. In this respect, the global shipping industry suggests the following:

In the case of pure car carriers (PCC), dry bulk carriers (transporting iron ore), tankers, LPG carriers and cruise ships, the ACP appears to be proposing significant increases to toll charges for use of the Neopanamax locks.

Noting that the environmental performance of bigger ships is higher than that of smaller ships, the global shipping industry would suggest that from the standpoint of promoting environmental sustainability, any toll increases for bigger ships using the Neopanamax locks should be aligned with those for use of the Panamax locks. 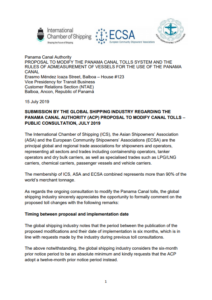