The National Transportation Safety Board issued an accident report concerning a hopper barge that sank off Cape St. George, Florida, with a cargo of scrap metal. There was no pollution reported, while also none of the crewmembers were injured. The incident resulted to a $750,000 damage cost.

Prior to the incident, the vessel was being towed by the towing vessel Kaitlin Olivia along with another barge, PTC 625, en route from Tampa, Florida, to Mobile, Alabama.

According to the report, LA Carriers, who accepted the two empty barges for bareboat charter, criterion for rough weather conditions was 4 feet; That is why the master delayed getting under way until next morning, waiting for the conditions to improve.

Following the accident, a dive survey revealed that the port and starboard manhole covers to void no. 3 and the port cover to void no. 2 were open, indicating that they were likely not properly secured or left open before sailing, and would therefore have allowed water ingress to both voids.

This means that as the voids began filling with water, it's possible that the barge’s draft would have increased and its freeboard concurrently decreased, allowing boarding seas to more easily reach the lower edge of the weathertight fiberglass cargo covers and flood the barge’s single cargo hold, causing the barge to sink rapidly.

NTSB believes that most likely, the cause of the sinking of the barge was flooding of the barge’s voids through improperly secured manhole covers due to the charterer’s failure to ensure adherence to its procedures for barge watertight integrity and draft limits.

Following the sinking incident, the PTC 598 and its cargo were not salvaged and LA Carriers officials reported to investigators that they would make changes to the company's TSMS, such as: 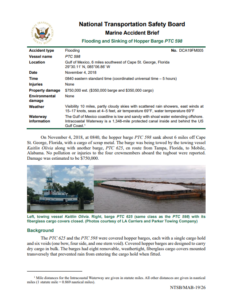