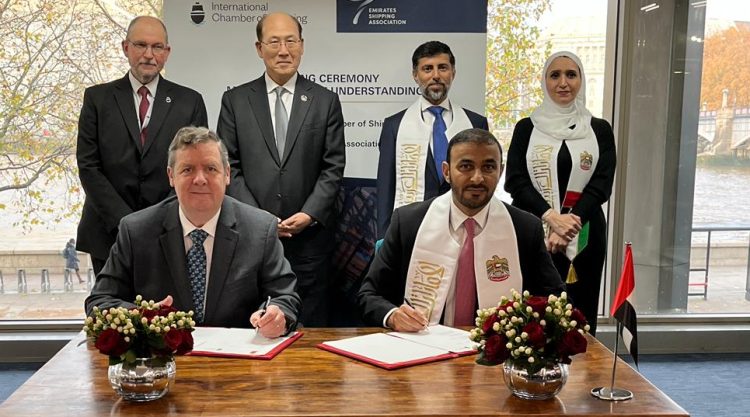 The International Chamber of Shipping (ICS) has signed a Memorandum of Understanding (MOU) with the Emirates Shipping Association for increased cooperation and collaboration towards the UNFCCC Climate Conference COP28 and beyond.

Following the success of the Shaping the Future of Shipping conference at COP26 in Glasgow, United Kingdom, and the increase profile of shipping at COP27 in Sharm El-Sheik, Egypt, ICS and the Emirates Shipping Association recognised the importance of COP28 and the role of shipping in the global energy transition. COP28 will be hosted in the UAE next year and the two organisations formed this milestone agreement to work with government of the UAE collaboratively in the lead up to the UNFCCC Climate Conference.

Sustainability is one of the important pillars of the association and we do look forward to engaging with the private sector and building their capacity to enable transition. Our collaboration with ICS and Ministry of Energy and Infrastructure (MOEI) at COP 28 will mark an impact within the maritime industry.

The UAE has a strong maritime background and continues to be a critical hub for the global shipping industry. The country has an ambitious approach to the industry’s energy transition. The next few years will be critical and shipping will play a fundamental role in delivering low carbon fuels globally, acting as an enabler for governments and industries to achieve their climate targets.

UAE has shown its leadership in maritime issues being one of the first governments to sign up to work on the Clean Energy Marine Hubs initiative (CEM-Hubs).  The CEM-Hubs initiative, which is co-led by a taskforce of CEOs, is a cross-sectoral public-private initiative aiming to accelerate the production, export and import of low-carbon fuels across the world. The initiative is co-ordinated with the support of the ICS and the International Association of Ports and Harbours (IAPH), and the Clean Energy Ministerial (CEM).