The outcome of COP 26: What does shipping have to expect? 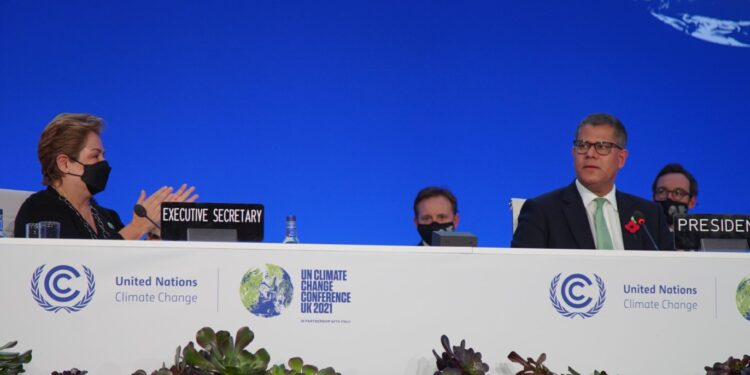 The COP 26, the major UN Climate summit of 2021, was wrapped up Friday, leaving mixed feelings for the effectiveness of future fight against climate change. On the one hand, the meeting achieved a global agreement to speed up action to reduce emissions -a hot topic for shipping sector. On the other hand, an apology by the COP 26 President at the end of the Summit signified the level of ambition reached was not sufficient. What does the future hold for climate? How are the agreements expected to affect shipping?

The 26th UN Climate Change Conference of the Parties (COP 26) took place in Glasgow on 31 October – 12 November 2021, gathering representatives from 200 countries to accelerate action towards the goals of the Paris Agreement and tackle climate change. Among the key topics of discussion for almost two weeks included the future of use of fossil fuels and whether the worst-hit countries by the climate crisis should be compensated.

COP 26 in numbers:
-120 world leaders
-197 parties represented
-40,000+ people from governments, civil society, business, and youth movements
While there was a general support by many countries for ambitious proposals, by Friday evening, the last day of negotiations, considerable differences remained around financing, loss and damage, and carbon market mechanisms, triggering a wide feeling of disappointment for the outcome of the high-level meeting.

I think today we can say with credibility that we have kept 1.5 C within reach. But its pulse is weak. And it will only survive if we keep our promises. If we translate commitments into rapid action. And if we deliver on the expectation set out in this Glasgow Climate Pact to increase ambition to 2030 and beyond. And if we close the vast gap that remains as we must.

…said President of COP 26, Alok Sharma, while concluding the meeting.

The positive outcomes of COP 26 at a glance

Despite typically not addressing directly shipping, the negotiations taking place in the UN Climate Summit have a profound impact on shipping operations as well, as the industry accounts for 2-3% of global CO2 emissions and is amid continuous discussions on the switch from fossil fuels to more alternative power sources. The sector’s official sideline event took place on 6 November, agreeing on the so-called Clydebank Declaration.

Under the Clydebank Declaration for Green Shipping Corridors, the 22 signatory countries including the UK, US, Canada and Australia, pledged to support the establishment of zero-emission maritime routes between two (or more) ports -referred to as green shipping corridors- aiming to set at least six such corridors by 2025, and aspiring to see many more corridors in operation by 2030. As such, signatories committed to:

Key factor for successful green shipping corridors will be the voluntary participation by operators. This was the main outcome directly concerning the maritime sector, but also other generic outcomes of the Summit are expected to impact, more or less, shipping operations. Let us take a closer look:

The Glasgow Climate Pact was the main tangible result of the Summit with many parties finding it as inadequate to set the world in line with Paris accord goals. Broadly explained, the pact asks -but not demands legally- countries to republish their climate action plans by end of next year, in COP 27 in Egypt, including more ambitious emissions reduction targets for 2030. The hope is that this will set the global agenda on climate change for the next decade.

The success of the Pact is that it makes the unprecedented mention of the role of fossil fuels in the climate crisis, something that even the landmark Paris Agreement was unable to achieve. Combined with increased ambition and action from countries, it means that the 1.5C goal “remains in sight”.

One of the hardest-fought phases and the main point of public disappointment was the fact that the text language on coal and fossil fuels subsidies was watered down several times, following last minute’s intervention by India, a traditionally major polluter. The Pact calls for “phasing down of unabated coal and inefficient fossil fuel subsidies”, even though the text initially was “phasing out”.

FIND THE CONTENT OF THE GLASGOW CLIMATE PACT HERE

Pledge to phase out of coal

More than 77 signatories pledged to phase out coal by 2050. Although coal is the biggest contributor to climate change, the agreement did not include major coal-dependent states like US, Australia and China. However, the agreement is expected to still have some impact on ship owners, operators and charterers who work in this trade.

Six years after the landmark Paris accord, an agreement was reached on the fundamental norms related to Article 6 on carbon markets, which will make the Paris Agreement fully operational. This will give certainty and predictability to both market and non-market approaches in support of mitigation as well as adaptation.

The third day of COP 26 marked the first time in the Summit’s recent history that a major event was hosted on methane – one of the major GHGs – with 103 countries, including 15 major emitters including Brazil, Nigeria and Canada, signing up to the Global Methane Pledge. Led by the US and EU alongside the UK COP26 presidency, the commitment equates to up to 40% of global methane emissions and 60% of global GDP.

The aim is to make clean technologies the most affordable, accessible and attractive globally in the most polluting sectors by 2030. This potentially opens up new prospects and challenges for ship engine manufacturers and fuel suppliers who need to accelerate their technological developments to align with the pledge.

On the auspices of the event, the International Renewable Energy Agency (IRENA) and the World Economic Forum launched a series of “Enabling Measures Roadmaps for Green Hydrogen”, aiming to empower policymakers to prioritize policies for green hydrogen and accelerate its deployment in line with a climate-safe 1.5°C scenario.

To remind, recent analysis by Bloomberg NEF confirmed that, although blue hydrogen (made from fossil fuels) is currently cheaper than ‘green’ hydrogen (made from solar or wind electricity), the situation should reverse by as soon as 2030. This is of particular importance as hydrogen is increasingly discussed across shipping as an interesting green alternative to traditional fossil fuels.

Amid a so-called “trade war”, the world’s two biggest emitters surprisingly pledged to boost climate cooperation over the next decade to achieve the 2015 Paris Agreement goal, focusing on areas as methane emissions, clean energy transition and decarbonization. This was seen as a considerable recognition of the problem by China, following years of hesitation to tackle its coal emissions.

Which was the overall feeling after COP 26?

In some cases, the outcome of the conference was reflected in the public opinion as “a profound disappointment”, “a bad deal dressed up as a success”. A major factor in this was that commitments made at COP are not legally binding but will have to be self-policed. After the watered-down deal was agreed, the COP 26 president fought back tears.
But even though the tangible outcome was considered weak, there was a general recognition of the importance of coal as main point of focus in the climate fight, an outcome that affects also the future of shipping.

It’s meek, it’s weak and the 1.5C goal is only just alive, but a signal has been sent that the era of coal is ending. And that matters.

“We have made progress on the three objectives we set at the start of COP26: First, to get commitments to cut emissions to keep within reach the global warming limit of 1.5 degrees. Second, to reach the target of 100 billion dollars per year of climate finance to developing and vulnerable countries. And third, to get agreement on the Paris rulebook. This gives us confidence that we can provide a safe and prosperous space for humanity on this planet. But there will be no time to relax: there is still hard work ahead,

Whether the level of ambition reached in COP 26 is sufficient remains to be seen in the coming months leading to the next UN Climate summit.

I know we can get there. We are in the fight of our lives. Never give up. Never retreat. Keep pushing forward. I will be with you all the way. COP27 starts now.

…the UN Secretary-General said after the event.

Find the UN Secretary-General’s statement on the conclusion of COP26 here: