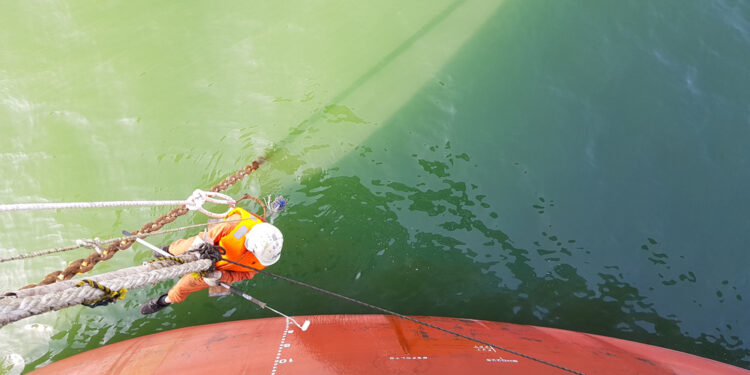 The movement of an internationally displaced community of I-Kiribati seafarers has been expedited by recent travel arrangements, but full repatriation remains tentative for many, Human Rights at Sea explains.

This week, 142 seafarers departed Fiji onboard MV REEF ENDEAVOUR, a small cruise vessel bound for Kiribati, after months languishing in the city of Nadi without receiving basic living wages.

To remind, the crewmembers became stranded when COVID-19 travel restrictions and Kiribati’s border closures disrupted plans to return home earlier in the pandemic. HRAS has been informed that around 23 individuals have elected to remain in Fiji, for various personal reasons.

Following six days of sailing, the ship will anchor off Kiribati’s main port of Betio, where the crewmembers will remain onboard for a two-week quarantine period prior to coming ashore. They are expected to be reunited with their families in mid-December.

Pastor Matthias Ristau, chaplain at the Deutsche Seemannsmission in Germany, said the voyage is a landmark development in the seafarers’ struggle for repatriation.

“After so much time waiting, it’s an incredible moment of happiness for all involved, and especially the seafarers that they are now sailing home finally after eight months stuck in Fiji,” he said.

Although the long-awaited journey is a major step in an ongoing logistical and political challenge, Mr Ristau said the seafarers’ return home involves more than physical repatriation.

“It’s time of advent now, and for them it’s the advent of coming home, full of hope,” he said.

“But we know from the others who went home before, that after such a long time being far away and so much uncertainty, it will take a long time to really arrive at home mentally and emotionally. Some of the marriages broke up in this time.”

Mr Ristau and his team at Deutsche Seemannsmission have played an integral role in caring for Kiribati’s seafaring community throughout the pandemic, coordinating support for the crewmembers and directly providing for a large group stranded in Hamburg, Germany.

Meanwhile, travel has been arranged for 39 I-Kiribati seafarers stranded in Brisbane, Australia, though their departure does not currently equate to full repatriation.

HRAS understands that the shipping companies which employ Kiribati’s maritime workforce have secured a flight from Australia to Fiji, expected to depart Brisbane on 2 December 2021.

According to Danish shipping line Maersk, the companies had favoured direct repatriation by plane, but the Kiribati government’s reluctance to facilitate the seafarers’ return resulted in a decision to transfer the crewmembers to Fiji instead.

Although the intention is for the seafarers to remain in Fiji as they await further repatriation, Kiribati’s ongoing border closures and a pattern of delays render the arrangement indefinite.

The transition is therefore a source of concern for the seafarers, who fear they will lose access to basic living wages, which they continue to receive while in Australia.

Captain Ross Nicholls, president of Mission to Seafarers in Brisbane, has been instrumental in providing welfare support for the crewmembers stranded in Australia, furthering repatriation efforts by facilitating COVID-19 vaccinations for the group in recent months.

The Mission to Seafarers team frequently organises social events for the crewmembers in Brisbane, and Mr Nicholls said the seafarers have formed a tight bond to support each other during the difficult months.

“For the older members of the group, they have spent many years as a seafarer living a life of isolation, however for the younger members who are less experienced and have young families, the stress of this detention and isolation is telling on their faces and by their actions,” he said.

“We have attempted to do the best we can, and our volunteers have stepped up and provided a wonderful level of care, support and love that we are renowned for.

“To a large degree we now feel helpless that they are going to be taken from our care and effectively placed in a ‘foster home’ with no support. It’s difficult to watch this play out as we truly care for them and their futures.”