Guidance for proper operation of scrubbers for Singapore-ships

MPA Singapore published an advisory to help Singapore-registered ships to operate safely and prevent pollution during installation and operation of scrubbers. The advisory shares observations from shipboard inspections carried out by Flag State and Port State Control, and documents best practices.

Consideration should be given to system component compatibility like piping and electrical cable connections, materials, ratings, etc. Also to be considered is whether the capacities of existing systems can support the scrubber system requirements, such as electrical power supply, sea water supply and fire-extinguishing systems.

The addition of a scrubber on board will increase the operational power requirements of the ship and thus, the ship's fuel consumption.

New ships can be designed with generators to accept the scrubber loads as part of normal operating conditions. However, for retrofit installations, these loads can be more than the surplus electrical capacity available in an existing ship’s electrical power system and may require the addition of a separate generator.

An electrical load analysis will help to determine if the ship’s existing power plant has enough capacity for the additional power demand of the scrubber.

Much has been said regarding the risk of scrubber flooding, with possible overflow of water down the exhaust pipe, causing damage to the attached engine and/or boiler. It has been estimated that it only takes minutes to fill up the whole volume of a scrubber body for a U-type scrubber while it takes even less time for an I-type scrubber.

What is more, the crew must periodically and diligently conduct tests of the high water level alarms and auto-stop function of water supply.

The most common type of scrubber is the open-loop scrubber. It uses seawater to wash and remove the sulphur oxide from the exhaust gas,. After that, this wash water is discharged overboard. While open-loop scrubbers may comply with the IMO EGCS Guidelines, the Guidelines stipulate only four threshold limits on the wash water discharge of scrubbers, namely, pH, PAH (Polycyclic Aromatic Hydrocarbon), Turbidity and Nitrates. They do not specify a threshold limit for heavy metals.

Because of environmental and socio-economic reasons, along with other considerations, some coastal states and ports have banned the discharge of washwater from open-loop scrubbers in their waters. When operating in these waters, ships equipped with open-loop scrubbers should change over to compliant fuel oil, and ships with hybrid scrubbers should switch to the closed-loop mode of operation or use compliant fuel oil.

For ships using closed-loop scrubbers, the residue, which is separated from the washwater, is not allowed to be incinerated on board the ship as banned under MARPOL Annex VI Regulation 16.2.6. Such residue would need to be retained on board for later disposal to port reception facilities.

Except for the safety system, it is also important not to neglect the pollution monitoring system, which covers both the exhaust emission and the washwater discharge. The crew should perform regular testing and calibration of the Continuous Emission Monitoring System (CEMS). This includes testing of automation, alarms and function of equipment, coupled with close monitoring during operation.

A scrubber may be considered faulty when its emissions surpass the standard as prescribed in the 2015 EGCS Guidelines. Any scrubber malfunction that lasts over an one hour or repetitive malfunctions should be reported to the flag and port State’s Administration, along with actions that will be taken to address the malfunction.

If the scrubber fails and cannot be put back into a compliant condition within one hour, the ship must  switch over to compliant fuel oil. Operators should consider having some quantity of compliant fuel on board as determined by the company’s SMS that could be used during the period of a scrubber malfunction.

The failure should also be properly reported in the EGCS Record Book. The reason for a failure could be because of several reasons, for example a control system error or a failure of a monitoring instrument, where the system malfunction cannot be rectified.

From 1 March 2020, ships will be banned from carrying fuel oil with sulphur content more than 0.50% m/m for use on board.

Before entering a yard for scrubber retrofitting after 1 March 2020, a ship is not allowed to carry high sulphur fuel because of the carriage ban. A ship in the yard undergoing the scrubber installation will not be affected by the carriage ban as the ship is under repairs/survey/retrofit and not in operation.

After the scrubber has been installed, the carriage ban does not apply to the ship. Nevertheless, the ship must use low sulphur fuel oil for its operations until the scrubber commissioning is satisfactorily completed by the ship’s classification society and an updated International Air Pollution Prevention (IAPP) Certificate with Supplement is issued. 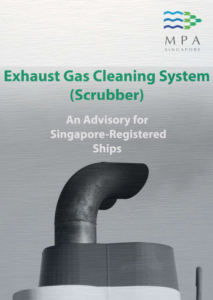