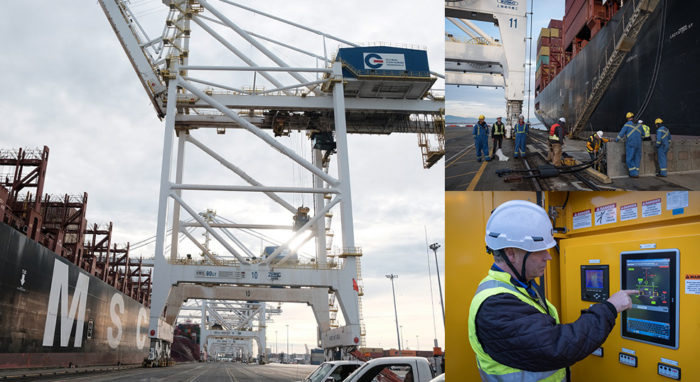 This transformative technology, which was completed in early 2019, allows vessels to plug into the clean electrical power grid at GCT Deltaport and turn off their auxiliary diesel engines while docked, eliminating up to 95 tonnes of air pollutants per vessel, which is equivalent to removing 20 vehicles off the road for one year.

Through this collaboration, we are helping protect our environment and community by encouraging vessels with the newest and greenest technology to call on GCT Deltaport.

In fact, this collaboration was enabled through the Government of Canada Shore Power Technology for Ports program and the Vancouver Fraser Port Authority, each contributing $3.4 million, for a total investment of $6.8 million. GCT provided auxiliary project implementation support as part of GCT Canada’s efforts to increase its competitiveness and deliver on its Global Commitment to sustainability.

Shore power is one of the ways we’re taking action to reduce air emissions and promote the use of renewable energy for ships. This is the fourth shore power installation at the Port of Vancouver, and the second at a container terminal. We, along with our project partners, will continue to seek ways to reduce air emissions from ships, reduce ship noise and improve air quality for terminal employees and neighboring communities.

It is further noted that shore power is a clean technology that enables ships that are fitted with the necessary technical apparatus to shut down auxiliary engines and connect to the land-based electrical grid, reducing fuel consumption of container ships while at berth by allowing auxiliary engines to shut down and the ship to be powered by the electrical grid, predominantly hydroelectric based, amounting to lower greenhouse gas and air quality emissions.

Over time and as more ships can connect to this technology, and as they grow in size and more terminals offer connections, emission reduction benefits are estimated to increase.

Moreover, Greece's Port of Killini, at the west side of the country towards the Ionian Sea, was to see the first shore-to-ship (STS) electrical supply connection in Eastern Mediterranean. On Thursday, 20th December, the Ro-pax ferry 'Fior Di Levante' would plug into the region's first shore power facility , in a special inauguration ceremony.

Through the installation of this green pioneering cold-ironing facility, developed under the European co-funded programme elemed, the port of Killini achieved a decline in air pollution, upgraded port facilities while paving the way for other Greek ports to become emissions-free hubs in the Eastern Mediterranean region.

In September, the technology company ABB was to install first shore-to-ship power solution at South Korea's Port of Incheon, enabling passenger vessels to cut emissions, noise and vibrations at berth. This will also be the first shore power solution in South Korea. The company secured the contract, after a pilot scheme for passenger ships to plug into the local grid received the go ahead from Incheon Port Authority (IPA).