Ever Forward containership refloated after a month 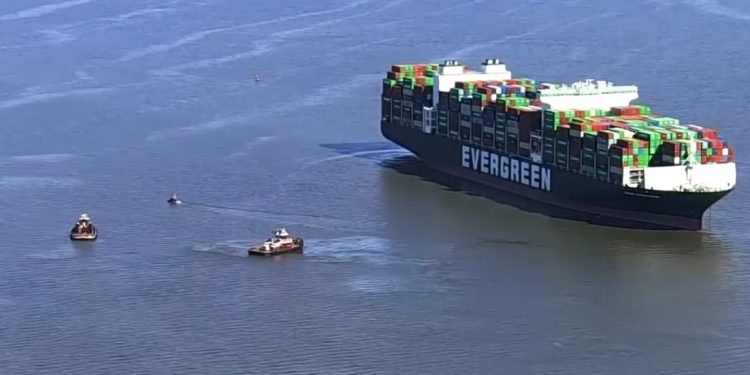 The Ever Forward containership was successfully refloated on Sunday, 17 April 2022, from the bottom of the Chesapeake Bay more than a month after it ran aground.

After two failed attempts to refloat the Evergreen Marine-owned containership, Ever Forward, the crews had determined that the best strategy is to make the vessel lighter by removing the containers.

This was the third operation to free the Ever Forward from the bottom of the bay. Consequently, after the removal of roughly 500 of the 5,000 containers it was carrying, the Ever Forward was refloated by two barges and five tugboats.

Following underwater inspections at nearby anchorage, Ever Forward will return to the Port of Baltimore and reload the cargo that had been discharged earlier this month and then continue on its previously scheduled voyage, which begins with Norfolk, VA

Throughout the refloating efforts, Ever Forward had been regularly found to be free of damage from the incident and no indication of fuel leakage or pollution

To remind, in the beginning of April the company had declared a General Average statement, noting that “In light of the increasing costs arising from the continued attempts to refloat the vessel, Evergreen declared General Average”.