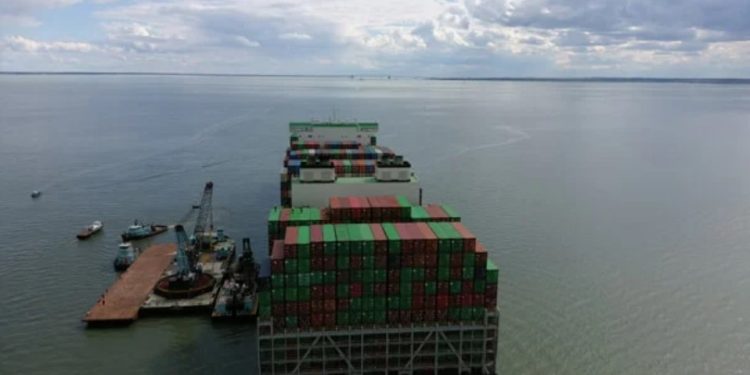 The lightering operation of the containership Ever Forward which still remains firmly aground in the Chesapeake Bay has began on April 9 and continues during the daylight hours each day.

After two failed attempts to pull the Evergreen Marine-owned containership, Ever Forward, the team determined that the best strategy is to make the vessel lighter by removing the containers. As informed,  the lightering operation began on April 9 and continues during the daylight hours each day.

According to the U.S. Coast Guard the target is to remove up to 550 boxes from the vessel. Her carrying capacity is reported as 11,850 and the vessel appears to be nearly fully loaded. The revised plan is expected to take approximately 2 weeks, however, it depends on the weather conditions and other variables.

The operation is not easy: 2 cranes with a sufficient height to reach the stacks and lift capability to manage the containers were positioned alongside. The containers are being placed on barges alongside the vessel and the barges are shuttling the containers back to the Seagrit Marine Terminal in Baltimore. There they are being offloaded with shore-based handling gear.

As Professor Sal Mercogliano of Campbell University said, the removal operation is requiring up to 10 minutes per container. On his social media he reported that 22 boxes were removed on Saturday and a further 21 on Sunday.

In order to ensure the ship’s stability and prevent any potential pollution, in addition to regular soundings of fuel and ballast tanks, a naval architect and salvage master have been appointed in order to remotely monitor an installed sensor system and evaluate the situation.