IEA launched its Offshore Wind Outlook 2019 noting an increase of 30% in the wind market between 2010 and 2018, which was achieved from technological developments and from the growth of offshore wind projects.

Specifically, the report highlights that Europe is leading the offshore wind development, with the UK, Germany and Denmark being the highlight of these developments. Yet, China added more capacity than any other country in 2018.

Despite the development in the sector, IEA states that today's offshore wind market doesn't even come close to tapping the full potential – with high-quality resources available in most major markets, given that the sector has the potential to generate more than 420 000 TWh per year worldwide.

In the past decade, two major areas of technological innovation have been game-changers in the energy system by substantially driving down costs: the shale revolution and the rise of solar PV. And offshore wind has the potential to join their ranks in terms of steep cost reduction.

# Europe is leading the growth #

In addition, the EU is home to the majority of the countries that lead the development, as bordering the North Seas, where high quality wind resources and relatively shallow water have provided exceptionally good conditions in which to develop offshore wind technologies and bring them to market.

Offshore wind is set for robust growth in the EU, with current policies aiming to multiply offshore wind capacity by 4 over the next decade. 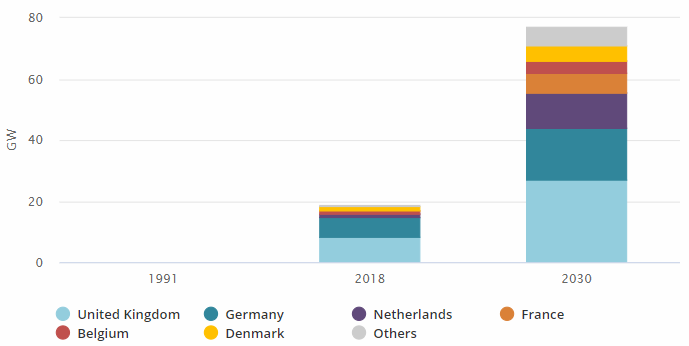 Except Europe, China is moving along with the changes and the development, as in 2018 it acquired 1.6 GW of offshore wind capacity, the most of any country.

Europe remains the technology leader to 2040, but China closes the gap spurred by recent efforts to expand their construction capacities for offshore wind. In the United States, state-level targets set the course for rapid growth over the next decade.

India, Korea and Chinese Taipei also have ambitious targets, while other countries, including Japan and Canada, are laying the groundwork for future offshore wind development.

To explore more on the Offshore Wind Outlook 2019, click here.