The Second Clean Air Outlook report concluded that the number of premature deaths due to air pollution could be reduced by around 55% in 2030 compared to 2005, if Member States implemented all measures agreed and announced under the existing EU legislation regulating sources of air pollution and limiting climate change.

According to the report, the EU's pathway to improving air quality rests on three pillars.

#1 The first pillar comprises the ambient air quality standards set out in the Ambient Air Quality Directives for groundlevel ozone, particulate matter, nitrogen oxides, dangerous heavy metals and a number of other pollutants. If the set limit values are exceeded, Member States are required to adopt air quality plans detailing measures to keep the exceedance period as short as possible.

#3 The third pillar comprises emission standards for key sources of pollution, from vehicle and ship emissions to energy and industry. These standards are set out at EU level in dedicated legislation.

The report notes that with the full implementation of all existing legislation, most Member States would be on track to fulfil the 2030 reduction commitments for four (sulphur dioxides, nitrogen oxides, non-methane volatile organic compounds and fine particulate matter)out of the five air pollutants regulated under the National Emission reduction Commitments (NEC).

The additional clean air measures announced in the National Air Pollution Control Programmes would accelerate further the projected improvements. However, these measures would not be enough to reduce ammonia emissions (which originate at 90% from the agricultural sector) to maximum permitted levels, as fifteen Member States would still have to urgently take actions beyond those announced in their national programmes.

In addition, it reveals that the clean air measures examined bring net benefits to society, with the benefits of these measures always overriding their costs, and contributing to boosting GDP in the long run. These benefits increase with more ambitious clean air and climate actions, highlighting the synergies of these two policies.

If all member states follow the clean air and climate legislation, the proportion of the EU population living in areas satisfying the current WHO Guidelines for fine particulate matter could more than double between 2015 and 2030.

The Commissioner for the Environment, Fisheries and Oceans Virginijus Sinkevičius commented that

This report sends a clear message. Further reducing air pollution would save more lives, reduce pressure on ecosystems and it makes economic sense. This is the approach we are taking with the European Green Deal and our Zero Pollution ambition. It is paramount that all Member States fully implement the agreed and planned measures and step up efforts to tackle emissions. 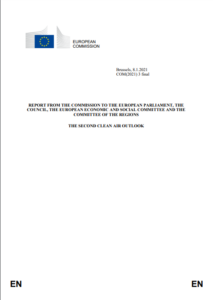