by The Editorial Team
in Emissions, Energy Efficiency

During its latest Annual Summit in Hong Kong on 3-4 October 2018, the Global Maritime Forum presented its Global Maritime Issues Monitor 2018 report, in which maritime leaders ranked ‘energy efficiency’ and ‘choice of emissions reduction technologies and strategies’ as most impactful and most likely to influence the sector in the next 10 years.

Meanwhile, the report ranked ‘non-fossil fuels’ and ‘alternative propulsion technologies’, both potential pathways towards the goal of reducing GHG emissions, as less significant in impact and likelihood over the next 10 years.

The report focused on the issue of decarbonisation of the maritime sector, noting that improving the energy efficiency of vessels and deciding on a strategy to reduce GHG emissions are two very important first steps on the path towards this goal.

‘Energy efficiency’ was among the issues with the best preparedness score, which could reflect the fact that the industry has been working on improving energy efficiency for a number of years and is preparing for the implementation of the necessary measures in this field.

This seems to be confirmed by our results on ‘slow steaming’, which received the best preparedness score of the section. 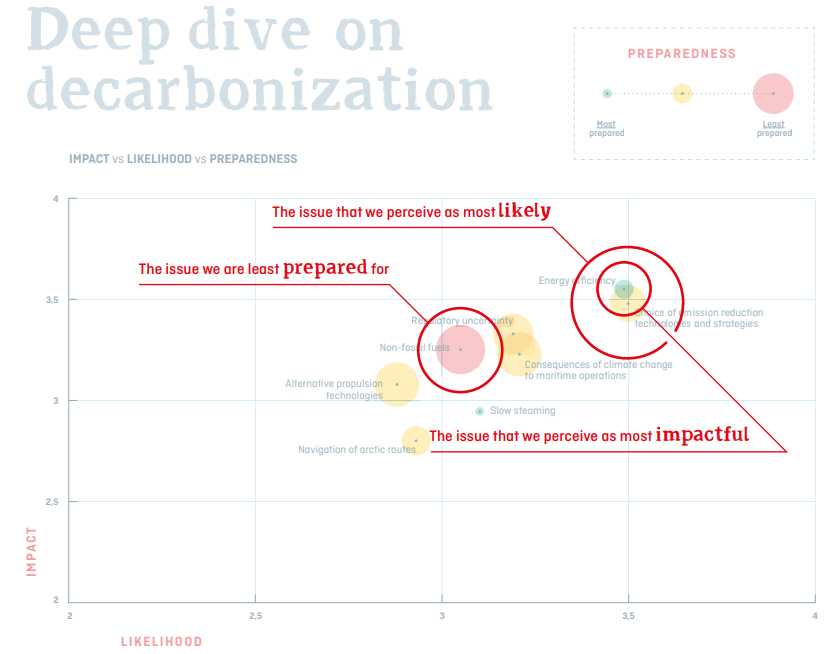 The ‘choice of emissions reduction technologies and strategies’, on the other hand, is an issue which the industry feels less prepared to take charge of, which could be explained by the fact that none of the competing technological alternatives to fossil fuels are currently seen as sufficiently mature or cost-effective, the report reads.

This seems to be further confirmed by the industry’s low perceived preparedness for both issues: ‘non-fossil fuels’ were given the lowest preparedness score of the section, with ‘alternative propulsion technologies’ ranking in third lowest place.

Christine Loh of the Hong Kong University of Science and Technology and former Under Secretary for the Environment in Hong Kong does not find the results regarding energy efficiency and emissions reductions surprising:

The maritime sector has already made decisions, so the impacts will show in the next decade. But regarding preparedness, maritime professionals seem unsure whether their company has made the right emissions reductions decisions.

Alastair Marsh, added that a combination of measures will be needed to reach the IMO goal, but that “there is no clear pathway, as pathways will depend on where investments are made from a production and infrastructure perspective and mitigation of safety and engineering risks for ship deployment.”