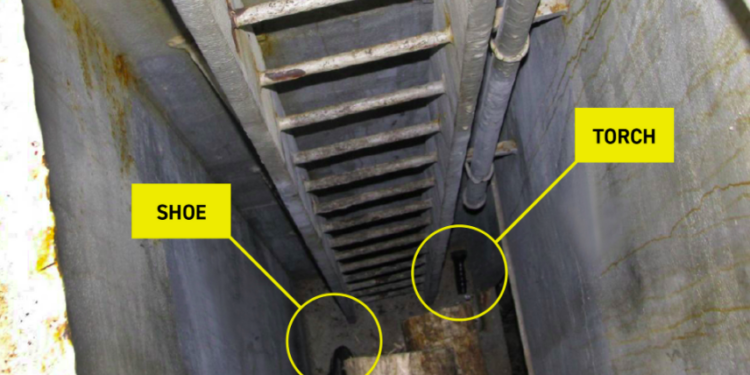 As part of its BSafe Campaign, Britannia P&I Club describes a case of fatality of two crew members after enclosed space entry onboard a bulk carrier.

The ship was loading logs in port Marsden, New Zealand, when the chief officer (c/o) entered a cargo hold which contained logs. Upon entry, he rapidly lost consciousness and fell from the entrance ladder. A fellow crew member who tried to rescue the c/o suffered the same fate. Both died due to asphyxia.

After loading logs at various ports in New Zealand, the ship had arrived in Port Marsden, where another 11,476m3 of logs were loaded. The logs were to be fumigated on passage to China, and two fumigation officials embarked to carry out a pre-inspection. They reported to the master that hatches 1F to 4F had excessive amounts of water visible, which needed to be removed before fumigation could take place, and that the rubber seal on hold No. 5 aft access door needed replacing.

The master discussed the matter with the C/O, who then proceeded on deck. He asked the bosun to follow him to hold No.5, where they opened the access hatch and the C/O climbed onto the ladder and started to descend. The bosun tried to follow, but after only a few steps the C/O suddenly fell onto the logs below. The bosun immediately alerted fellow crew members standing at the gangway, then made his way to the aft mooring station to get a rope to retrieve the C/O.

The second officer (2/O) was at the gangway and alerted the master by radio. He then fetched a breathing apparatus (BA) set and also oxygen from the ship’s hospital. An able seaman (AB) ran into the accommodation to alert the third officer (3/O) in the ship’s office, then tried to follow the AB to the incident site. However, the AB disappeared from view, so the 3/O instead went to hold No.4, where he met the master. Both were unsure of where the incident had occurred.

When returning to the access, the bosun found the AB, who had alerted the 3/O, climbing down into the hold with another crew member about to follow. The bosun managed to prevent the latter from entering but heard the AB fall. Looking down he noticed him lying, apparently unconscious, on top of the C/O.

The master arrived at the scene and instructed the 3/O to fetch a BA set. The master then went to the wheelhouse to activate the general alarm. On his way, he informed the fumigation officials, who called the local emergency services to request an ambulance.

The 3/O returned and put on the BA set, tied the rescue rope around his waist and entered the hold. He was able to tie the rope around the C/O, who was then hauled onto deck.

As the 3/O was too exhausted to attempt to rescue the AB, the first engineer (1/E), put on the other BA set and descended down to the hold. However, the BA set prevented him manoeuvring past a protruding log so he exited, and instead put on an emergency escape breathing device (EEBD), then re-entered.

When he got to the AB, he noticed what he thought were signs of life. He took off his EEBD mask and placed it momentarily on the AB to try to revive him. He then replaced his mask and managed to attach the rescue rope to the AB, who was hauled onto deck. As the 1/E was nearing the top of the access ladder, his EEBD ran low on compressed air, and he had to be hauled out. When he reached the upper deck, he was suffering from asphyxia.

Ambulance staff arrived and tried to resuscitate the C/O and the AB, but both were pronounced dead at the scene. The ambulance staff also administered oxygen to the 1/E, and he was airlifted to the nearest hospital.

Britannia Club shared the following lessons learned, based on the information available in the investigation report: