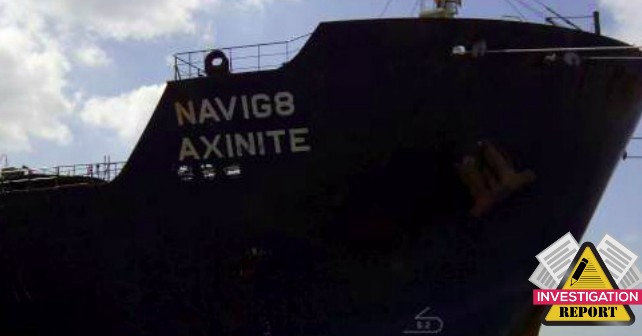 RMI issued an investigation report on a Third Engineer fatality onboard the oil/chemical tanker NAVIG8 AXINITE, while underway in the English Channel in July 2020.

On 29 July 2020, the RMI-registered oil/chemical tanker NAVIG8 AXINITE was underway on a ballast voyage from Rotterdam, Netherlands to Pivdennyi, Ukraine.

While cleaning Cargo Oil Tank (COT) No. 3, port and starboard, it was observed that the wash water was not being heated to the required 75 degrees (°C). Troubleshooting efforts by the crew were not successful in increasing the wash water temperature.

The Chief Engineer (C/E) then decided that further troubleshooting would wait until after completing the required fuel changeover upon departing the North Sea Emissions Control Area (ECA).

A short time later, a loud bang was heard by crewmembers working near the port cargo manifold. They saw a large quantity of steam coming from the condensate return line observation tank. As they got closer, they discovered the sight glass for the observation tank had failed. They also found the 3/E lying on the deck about 10 m to starboard of the observation tank.

First-aid measures were immediately started; however, the 3/E succumbed to his injuries and was pronounced deceased at 2100 on 29 July 2020.

Additional casual factors identified by the Administrator that may have contributed to this very serious marine casualty include:

In response to this very serious marine casualty, the company took the following preventive actions:

1. A safety alert was sent to all ships in the company’s managed fleet to require:

2. The Company’s PMS was amended to include a quarterly inspection of the observation tank flame arresting screens.

3. The observation tank sight glasses onboard ships in the company’s managed fleet were modified to include a metal cover to limit the unprotected glass area.

4. Additional training on tank cleaning heating systems was provided to crews onboard ships in the company’s managed fleet.

5. The standing risk assessment for tank cleaning was updated to include control measures to prevent a similar incident.

6. The incident has been included as a case study to use during crew training seminars.