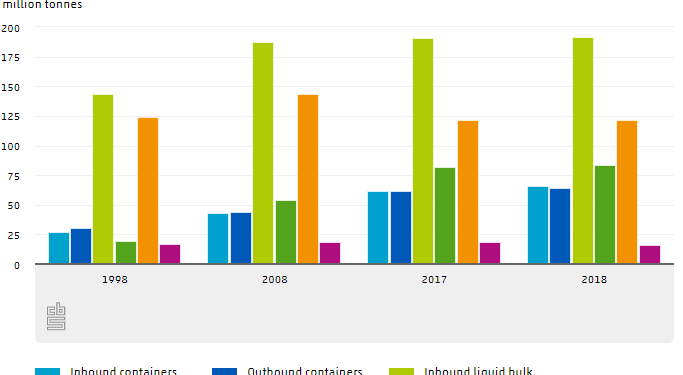 In 2018, the overall volume of incoming and outgoing cargo shipments to and from Dutch seaports achieved a historic high of approximately 605 million tonnes. This marks an increase of more than 1.5%, compared to 2017. In addition, at 4.5%, container transhipment also marked the highest increase, according to Statistics Netherlands (CBS) newly released figures.

Moreover, the share of containers in total cargo handling continues to grow from 14% in 1998 to 21% twenty years later. Imports and exports are more or less equal in terms of size and trend. Container handling saw an increase of 4.5% in 2018, while imports grew 6%, with exports also increasing by about 3%.

Furthermore, the weight of transhipped bulk goods did not rise in 2018. Tonnage of unloaded dry and liquid bulk increased, with outbound liquid bulk was up by more than 2%. Additionally, exports of dry bulk reduced by almost 12%.

Regarding bulk goods, their dominance in seaports is falling, as in 1998, three-quarters of all handled goods were in bulk, while this share was 68%t last year. The flow of dry bulk was more or less stable during this period and amounted to about 140 million tonnes.

Finally, three-quarters of goods are loaded and unloaded in the Port of Rotterdam, which also includes the ports of Moerdijk, Dordrecht and Vlaardingen. In 2018, both flows were up by around 1%. Over 16% of goods are handled in the Amsterdam port area, with throughput rising by 1%. The number of unloaded goods in the seaports of Zeeland Seaports and Groningen Seaports increased by over 10% in 2018.