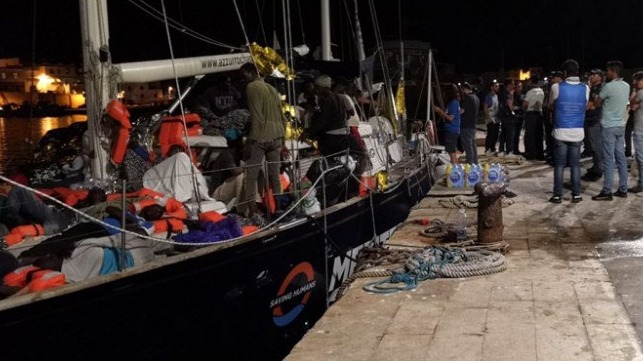 Overcoming Italy's ban, the migrant rescue boat 'Alex', operated by the Italian NGO Mediterranea, docked at the same quay as the Sea Watch 3, having onboard 41 migrants. Mediterranea declined the Maltese offer to dock in Valletta commenting that the people onboard weren't in the position to sustain such a long journey.

In the meantime, according to Reuters, Seehofer discusses with the EU on solutions for migrants onboard the Alex and Alan Kurdi rescue vessels, with the latter having been denied permission to enter the Italian port.

Therefore, the NGO Sea-eye has subsequently announced that the Alan Kurdi, with 65 rescued migrants on board, will sail to Malta.

Concerning Sea Watch 3, although its captain Carola Rackete has been free, the vessel is still detained by the Italian authorities.

In light of the above, Human Rights At Sea commented that NGO search and rescue operations have been criminalised since 2015.

The Italian Interior Minister appears to be intentionally misinforming the general public through misinterpretation of maritime law, levying unnecessary fines and further calling Captain Rackete an outlaw and a people smuggler.

In the past, HRAS Chief has highlighted her worry concerning the Italian Government's decision against NGOs that save migrants in the Mediterranean. Specifically, Chief Chief Dunja Mijatovic has commented that

(migrants saved from the sea) should never be disembarked in Libya because the facts show that it is not a safe country.